Home » Rugby » ‘This is the way it breaks down, man’: The day Bennett snubbed Crowe

One is a legendary actor, an ageless star of the small and silver screens. He has a true sense of the grand occasion, reinventing himself with each performance, still at the top of his game after all these years.

The other is Russell Crowe. 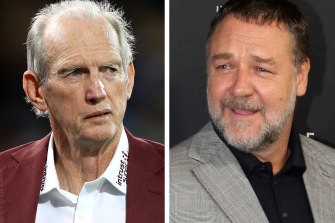 When Crowe and Wayne Bennett met in 2011 about the coach joining South Sydney, the Hollywood actor had some advice for the mastercoach.

Bennett had already told St George Illawarra he wasn’t staying beyond that year after leading them to the premiership the previous season.

The coach’s former club, Brisbane, was circling. So were the Newcastle Knights, who were being led out of the wilderness by the young mining magnate Nathan Tinkler.

Johnny Lang had held the fort at Redfern for two years. Which coach came next would be crucial to Souths winning their first premiership since 1971.

“This is the way it breaks down, man,” Crowe said to Bennett. “Brisbane is about returning to your roots. South Sydney is about football. And Newcastle is about money.”

“You are spot on,” Bennett deadpanned.

“Then he went to Newcastle!” Crowe roars with laughter as he retells the story. “I thought I had him for a second.”

At the time, Souths officials certainly thought they had him. They were furious Bennett signed with Newcastle at the 11th hour and more than a few at the time said he’d “reneged” on a handshake agreement.

Yes, like $5 million over four years, including $1 million up front and use of Tinkler’s private jet.

“Everything we believed about us being a good fit for him was true,” Crowe says. “That’s why he wanted to come to Souths eventually — because he knew that was true as well. He came to us at a great period. Obviously, it was a tricky beginning with Anthony [Seibold, former Souths coach] and all the toing and froing. But these things are sent to challenge you and you get through them. Wayne has been fundamentally fantastic for us.”

The animosity felt towards Bennett then has since abated, of course.

He went to the Knights and ended up leaving early after Tinkler’s fortune dried up. Souths signed Michael Maguire, who three years later delivered a fairytale premiership for the club. 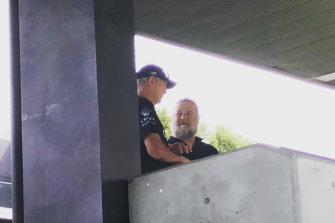 Russell Crowe and Wayne Bennett caught up on Monday at Redfern Oval.

Bennett has never given himself an end-date. At least not publicly. He’s not interested in being a “coaching co-ordinator” or “head of football”. He’s a coach, straight out, and will move on to the next club, the next contract, as long as it means he can win a premiership.

Which makes his next move interesting. Theories abound about where Bennett will land.

Some have tossed up Parramatta if Brad Arthur can’t get the job done this year.

What about the Broncos? Surely Bennett would relish the same Brisbane board that shoved him out the door — so the club could sign Seibold — asking him to come back to fix a broken club.

He’s told Souths he wants to return to Brisbane to be closer to his children but the most realistic scenario is him joining whichever Brisbane franchise is named the NRL’s 17th team — whether it’s the Redcliffe Dolphins, Brisbane Firehawks or Brisbane Jets.

But that remains problematic, too.

The ARL Commission won’t make a call on the second Brisbane team until July. Chairman Peter V’landys has given every indication publicly it will happen. Privately, he’s told others it’s far from a done deal.

Bennett has already had discussions with the Brisbane Jets while the Firehawks are taking advice from Shane Richardson, the former South Sydney boss who remains close to Bennett despite incessant claims they have fallen out.

“There’s a number of strong applicants bidding to become Brisbane’s second team and they will need a coach, so I won’t rule anything out,” Bennett told News Corp last month.

Souths have offered him consultancy and ambassador roles next year if he doesn’t sign with any club, although that seems unlikely.

“He is a revelation, Wayne — it has been a fantastic period for Souths and we’re hoping it continues,” Crowe says. “We have put in front of him all the different ways we think he can bring us value in the future. We understand there is a lot of other things in the way of that, personal things. Our hope is he stays connected because he is a South Sydney man for sure.”

Bennett is also a Bennett man, as Crowe has found out.

“The only time I have negativity about him is when we are on the tennis court,” Crowe, 56, says. “He’s fit and he’s super smart as well. If you have a particular habit, he’ll pick up on it and use it against you. I saw him play my son in basketball. Whereas I would give my youngest a little bit of leeway, he gave him nothing.”

It’s the classic Bennett play: always sending a reminder, whoever it is, that he’s the boss.