Newcastle’s bizarre handling of David Klemmer this week highlights the problems at the club.

The fact coach Adam O’Brien, who is struggling to save his career, was hesitant to back the call from some at the club to axe the front-rower from the team for his antics in the dying stages of Sunday’s loss to the Bulldogs says a lot. It was a call from above.

Klemmer ignored an instruction from O’Brien to come from the field, then verbally abused a Knights trainer, during Sunday’s match against Canterbury, prompting the struggling club to issue the prop with a show-cause notice.

A day after a mooted late-season trade to Parramatta failed to eventuate, Klemmer was omitted from the Knights’ extended squad to face Wests Tigers on Sunday.

It’s hard to know who is in charge at Newcastle any more. It’s why the likes of Alex McKinnon and Garth Brennan have walked out this season, unhappy with the direction the club is heading. 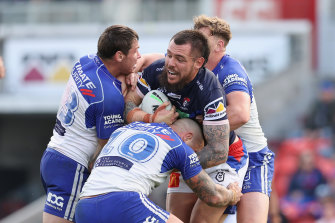 Klemmer’s teammates, who have sent him messages of support, are as confused as he is about what sins the former NSW and Kangaroos prop will have to answer for when he fronts the Newcastle board next week.

The Rugby League Players Association, which sat down with Klemmer to find out more about the incident on Wednesday, is equally bemused.

As it stands, Klemmer, having been issued with the show-cause notice, can’t even train with the team. The club has supposedly drawn a line in the sand by standing down the man leading the players’ player voting for seemingly caring too much.

Klemmer is renowned for his short fuse. There is no doubt he should have handled the situation better and listened to instructions rather than fire off an expletive-laden tirade at trainer Hayden Knowles. However, anyone who sits on the sideline at an NRL game will tell you that you’d struggle to go through a round without seeing something similar.

O’Brien is in Klemmer’s corner. According to sources at the Knights, he has privately thrown his support behind the embattled prop despite the power he once yielded seemingly diminishing by the day.

The question that has been asked during the past 24 hours, since Newcastle sent out a press release confirming the decision, is whether there is more to the story. There has to be, right? The course of action seems out of context with the incident.

Apparently not. Suggestions there was a post-match altercation between Klemmer and Knowles have been strongly denied. 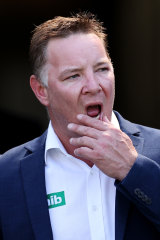 Newcastle coach Adam O’Brien is under pressure to keep his job.Credit:Getty

Klemmer was taken away by Sport Integrity Australia testers and did not return to the change rooms until much later, otherwise there may have been another heated exchange, judging by the steam coming out of his ears during the team’s hapless performance against his former club.

Knowles and Klemmer have history. The trainer, who joined the Knights from Penrith this year, is the right-hand man of NSW coach Brad Fittler. Klemmer was controversially left out of the Blues squad a couple of years ago.

The 28-year-old prop, like others in the game, isn’t the biggest fan of the alternative methods of Knowles and Fittler.

The red pen was soon put through his name for the Blues due to his attitude, NSW insiders have said. Despite playing 14 games for NSW between 2015 and 2019, Klemmer was not named in Fittler’s 27-man squad for the 2020 post-season Origin series.

Those connecting Parramatta’s pursuit of Klemmer on Monday and Newcastle’s sanctions are off the mark, too.

Klemmer is comfortable with the club not letting him leave. In fact, it was Klemmer who stopped the potential switch in its tracks for family reasons, given he would have to leave his wife and four children for up to 10 weeks.

Now he finds himself at a crossroads in his career. He has one year left on his Knights deal, worth about $800,000.

The club’s salary cap is not in great shape. A club with one of the best junior league nurseries in the world is now relying on a recruitment manager based in Queensland, who is close to the chief executive.

Perhaps the seemingly excessive action against Klemmer isn’t a lack of judgment, but a move with desired intentions. Time will tell.