For a footballer who has been recycled so many times, it is only fitting Tom Hickey is also a green warrior.

The AFL has championed many social causes, be it the fight to stamp out racism or its support for same-sex marriage, but has been quiet on climate change, which US president Joe Biden has described as the “existential crisis of our time”.

Hickey is one of a number of current and past league footballers involved in the AFL Players for Climate Action group that will push for change within the industry and hopefully at the top in Canberra.

The charity lists former North Melbourne and Port Adelaide defender Jasper Pittard and Kangaroos ruckman Tom Campbell as directors alongside Emma Pocock, who is the chief executive of FrontRunners – an organisation working with athletes to discuss climate issues – and wife of former Wallabies captain David Pocock.

Hickey, starring with his fourth club Sydney, wants to use his platform as an AFL footballer to drive change so his son and unborn twins can appreciate the beauty of the Great Barrier Reef as their mother did as a child. He has taken to the streets and marched with school children. At one rally, he was moved by a teenaged girl holding a sign “Why should we go to school if you won’t listen to the educated?” regarding climate change deniers who ignore science.

He is not asking for people to radically change their lives but to know that every bit counts. Personally, he is aiming to be the change he wants to see. 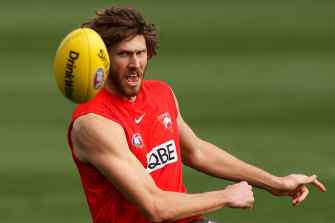 Hickey and his wife Chloe buy their fruit and vegetables from organic supermarkets and regenerative farms. Meat, which they eat “three to four” times a week, is sustainably sourced from a farm they trust, though Hickey has pledged to become a vegetarian after he retires.

“I’ll just lose too much weight if I went purely vegetarian,” he said.

The ruckman with the wild hair and beard to match has a wardrobe that is more op-shop than designer label. They buy second-hand items on Gumtree and Facebook Marketplace, use compostable nappies, and challenge themselves to see how low they can keep their weekly rubbish.

Travel is offset, though he accepts there are aspects of a footballer’s life which are incongruous to his environmental beliefs.

“That’s a hard thing. When you tell people that you are trying to be more environmentally conscious the first thing they go to is what you’re doing wrong,” Hickey said.

“I understand that flying is a big factor. We’ll do what we can to offset those flights. You can offset a lot of things now.

“The best thing for people to know is you don’t have to change your whole life. It’s the little things you can do that add up to a big thing.

“You don’t have to go from eating meat every meal to being vegan to stop our footprint. 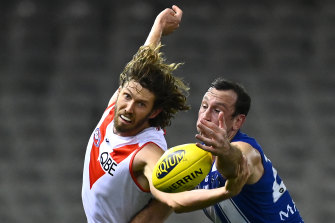 Hickey says he can see a change in enviromental awareness among the AFL’s younger brigade.Credit:Getty

“You can go to two meals a week, buy a keep cup instead of takeaway coffees, or you can bring your own bags instead of buying a plastic bag every time you go to the shops, or buy in bulk.

“The little things that we can do as a collective that can make a big difference. If 20 million do that you’ve stopped a lot of waste going into landfill.”

At West Coast, his constant reminders to teammates about using keep cups earned him the nickname of the Eco Ruckman from Luke Shuey.

Hickey has found more traction in the next generation of players.

“You see the school strikes for climate action,” he said. “It’s definitely become more of a topic. You see more guys carry their own water bottles and keep cups.

“We can still get better, but there’s definitely starting to be a change.”