West Coast overcame a recent run of outs and another poor start to bounce back to form after sweeping to a clinical win over Adelaide.

Held goalless in a dour first quarter, the Eagles rediscovered their best footy for the remainder of the contest, their weight of territory dominance and sheer class around the ground eventually overwhelming the Crows. 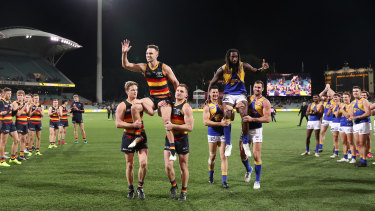 Brodie Smith of the Crows and Nic Naitanui of the Eagles get chaired off after their 200th games.Credit:Getty Images

The only sour point was the exit in the dying minutes of captain Luke Shuey, who came off the park and had his right calf iced.

“He’s got calf awareness,” West Coast coach Adam Simpson said.
“At this stage we don’t know – it could be nothing but we’re holding out hope.
“It’s definitely minor, no matter what.
“Because of history (of calf injuries), we didn’t want to take a risk.”

Jamie Cripps (five goals) and Liam Ryan (three) were far too elusive in attack for Adelaide as West Coast snapped their three-game, post-bye losing streak with an emphatic victory which came from modest beginnings.

Genuine scoring opportunities between the two out-of-sorts sides were at a premium early as the back lines dictated.

Shannon Hurn and Jeremy McGovern repeatedly got into the right spots in West Coast’s defensive area as Adelaide’s forwards found the going tough.

Meanwhile, the late withdrawal of Josh Kennedy (calf) and ongoing lack of conviction of Jack Darling, statistically mired in his biggest form rut since his 2011 rookie campaign, meant it was equally slim pickings at the other end.

The Crows, held to the lowest score in their 30-year history last week against Essendon, were on the cusp of a woeful run of three goals in their past six quarters before being relieved with 1:45 left in the first term when Taylor Walker converted a free kick, the only six-pointer of the dour stanza.

The temperature of the contest completely changed in the second term – and it was West Coast’s seasoned cream which rose to the occasion, led by Cripps.

Nic Naitanui got on top in ruck, smooth-moving Andrew Gaff broke lines and found plenty of the pill, and Elliot Yeo willed himself at the contest to produce his best patch since his return to the team.

The Eagles were even better in the third quarter, all five of their goals conjured by their small forwards (Cripps and Jack Petruccelle two each, one to Liam Ryan) as the margin increased to 21 points. 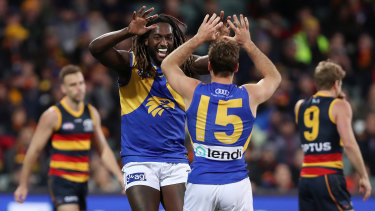 Jamie Cripps of the Eagles celebrates a goal with teammate Nic Naitanui.Credit:Getty Images

Ryan’s kicking boot had been awry but he re-aligned it in the fourth with two majors, the first a gift from a poor Andrew McPherson kick-in and the second after out-duelling Chayce Jones as West Coast went from strength to strength.

Adelaide’s poor day got worse when Nick Murray was substituted out in the fourth after soaring over Darling and Jake Kelly for a high mark in defence and crash-landing badly.

“At the moment, we’re just too far off our best as individuals and as a team,” Crows coach Matthew Nicks said.

“In the second half, for whatever reason, we were challenged and we fell away.

“We pride ourselves on a certain style and we’re not showing it at the moment.”

THE SHARPEST SHOOTER OF ALL

Since being taken with the 12th pick in the 2017 national draft, Darcy Fogarty hasn’t quite cemented his spot at the top level, making 36 AFL appearances and 31 in the SANFL in that time.

But dead-eyed Darcy is cementing his place in history in other ways.

Fogarty slotted two of Adelaide’s three second-quarter goals, a regulation set shot and a stunner with a minute left in the half.

After marking in front of Tom Cole, Fogarty, from outside 50 and beyond the boundary line, launched a missile that never looked like missing.

Jamie Cripps has always loved a goal and his sizzling, career-best display on Sunday was as good as it gets.

The veteran goalsneak’s radar has been off in recent weeks but he straightened up neatly on Sunday with his best haul in two seasons (four).

Cripps goaled twice in two minutes during a sizzling second-quarter cameo – the second one after being spotted up by Yeo, who bustled out of the centre from a perfect Naitanui tap.

The chance for three majors in three minutes went begging when Cripps missed moments later but he came alive again in a match-winning third term.

Naitanui seemed to have eyes on the back of his head when his reverse-flicked tap at a forward stoppage was pouched by Cripps who stormed past Keays and goaled.

Cripps then notched his fourth when he outmarked Will Hamill before providing the assist for Jack Petruccelle’s goal.

Cripps equalled his personal-best when he jagged his fifth deep into the fourth with a magnificent finish from a stoppage.

After the match, Simpson and Nicks both spoke about the fixturing nightmare currently facing the AFL.

“I’d hate to be in the AFL’s shoes at the moment,” Simpson said after learning eight players from GWS and Sydney, including Giants star Toby Greene, were ruled out of Sunday’s NSW derby at Metricon Stadium and forced into isolation after attending the Wallabies-France rugby clash at AAMI Park, a COVID-19 exposure site.

“It’s a big decision to make but I’m assuming if you can’t field a team, we should probably put things on hold for a week or so.

“Obviously it makes it quite difficult to win if you’re missing players.

“I’ll leave that up to the AFL – I think they’ve done a pretty good job of keeping the season going.”

Nicks put the situation into context.

“We’d love to continue to push on and play, but we also have huge respect for the community and country,” he said.

“We’ll do the right thing; we’ll do whatever it takes. If that means it’s a week off, we’ll prepare and take the week.

“Our advice to our staff and players is if you can limit your exposure to large gatherings and public events, then do so.

“I’ve got a feeling there will be a fair bit coming.”