I’ll never forget the first time Wayne Bennett coached me in the late 1990s when he became Australian coach.

The team was staying in Bondi and on the first day of the camp he called me into this room.

“As long as you turn up and train, and train well, and you don’t take the young blokes with you, you can have a beer. But, if it affects your performance, I’ll stop it.”

I cartwheeled out of his room all the way down the road to the Bondi Hotel.

Then I thought about it. How many coaches would say something like that to a player? How many restrictions would they put on you? How many would be fine with you going to the pub? 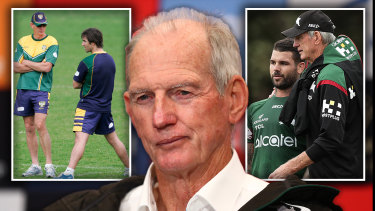 Wayne Bennett has been getting something special out of his players for decades.Credit:Craig Golding, Getty, Getty

I didn’t take it for granted. I appreciated that he treated me like a man, just as he has with every player he’s coached in 45 years.

Bennett’s different to other coaches. He knows how to manage all the different personalities that make up a football team. He’s a genius, as we were reminded once again with his side’s shock win over Penrith in the first week of the finals.

The great ability of Bennett is that he can make his team believe when nobody else does. He doesn’t over coach. Instead, he delivers simple messages.

In horse racing, certain horses run for certain jockeys. In rugby league, certain players only play for the supercoach.

If I had to design the perfect coach, I’d combine the man management of Bennett with the tactical brains of Craig Bellamy. It is little wonder they had so much success in the late 1990s and early 2000s when Bellamy was learning his trade as Bennett’s assistant at the Broncos?

Bennett was at his best against Penrith.

Leading into the match, I gave Souths no chance in the world. All I was thinking about was the attack without the suspended Latrell Mitchell and the knockout punch he provides.

But Bennett flipped it. They went from a team focussed on attack to a team with fast-moving aggressive defence led by four players: Keaon Koloamatangi, Jaydn Su’A, Cameron Murray and Jai Arrow. 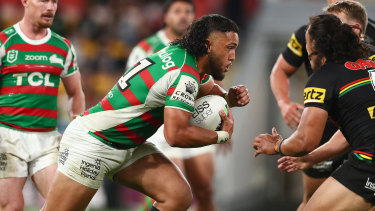 Souths simply frustrated Penrith out the game, getting off their line so quick, taking time off Nathan Cleary, shutting down their lethal left-side attack.

Their scramble was incredible. The Panthers had four genuine chances to score, but Souths scrambled that hard for each other.

Special mention to rookie fullback Blake Taaffe. I wondered how he could replace Mitchell, but Bennett clearly had no concerns.

When he dropped that first Cleary bomb, I thought, “Here we go”. But for him to come back and play the way he did showed some real resilience.

Late in the game, he made some huge plays, especially when he took that kick over the top of Stephen Crichton and the tackle on Viliame Kikau after he went through.

A week ago, I couldn’t see anything other than a Storm-Panthers grand final. I thought Souths would go out in straight sets.

Now they get the week off and, with Bennett pulling the levers, who knows how far they can go?

Penrith can still win the competition, even if they must go the long way around.

Saturday night’s match against Parramatta is the most important game because they’re under so much pressure.

Some of their players, like Cleary and Jarome Luai, will have learnt from State of Origin that big matches bring a roller coaster of emotions.

They should also have realised that you only get a few opportunities to score when you have the momentum.

There were times against Souths when Penrith had the momentum but didn’t strike. They didn’t throw enough footy at them. Then they had to play catch-up footy late.

This game against the Eels is an absolute flip of a coin.

If Parramatta start well in the first 15 to 20 minutes, it will be fascinating to see how Penrith respond.

I’ve been asking for the past month how much petrol is left in the tank for the Roosters.

They must be running on fumes and even more so after the suspension of hooker Sam Verrills and injury to Sio Siua Taukeiaho.

They also meet a Manly side that was left hurt and embarrassed by the loss to the Storm. 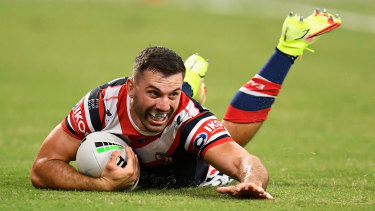 The Roosters need a big game from James Tedesco to overcome the Sea Eagles.Credit:Getty

I reckon the Sea Eagles will bounce back. They can’t play any worse.

Everything needed in a big game they didn’t have: no discipline, cheap penalties, too many errors. They gave themselves no chance of winning.

The key against the Roosters is the ruck.

If Manly can dominate that area, they will minimise the influence of James Tedesco, who has been incredible this season when playing off a quick play-the-ball, pinballing through the middle.

The man Manly really needs to stop in the middle, though, is Victor Radley. His performance last week in the narrow win against the Titans was among his best in the NRL.

I was watching alongside Paul Gallen, who was pointing things out as the game went along.

Radley made half a dozen tackles in the first half that stopped clean breaks and his ball-playing in the middle is top shelf.

He’s so tough, so competitive, and inspires his teammates with his big hits.

He also possesses that attribute that every fan loves: he doesn’t feel pain. He doesn’t understand the word “fear”. Not bad traits for a forward.

But if Manly can generate 50 per cent of the possession, I can’t see the Roosters holding them.

Last week, the Roosters right edge looked vulnerable. That’s where the Titans made that break late in the match.

If Roosters halfback Sam Walker starts, he’ll be a target on that edge, where Josh Schuster and Tom Trbojevic like to roam.