Home » Rugby » The Cowboys are actually … good? But not everyone is surprised

If there was one thing that united NRL pundits before the season began, it was a shared belief that North Queensland would either claim the wooden spoon or at least be rummaging through the cutlery draw by September.

The logic seemed sound. Across the 2020 and 2021 seasons, they managed only a dozen wins. Only Canterbury were worse last year, while the Cowboys were beset by questions around the effectiveness of coach Todd Payten and his relationship with Jason Taumalolo, the devastating middle forward and club captain.

Eight rounds into the 2022 campaign, the turnaround has been remarkable. A win over the struggling Knights in Townsville on Saturday night would be their sixth for the season and entrench them into the top four. They are the NRL’s most-improved club but not everyone has been doing a double-take.

“People keep telling me how surprised how good they are but between those four walls, it’s not a surprise and they know where they need to be,” said Cowboys great Johnathan Thurston, who Eels worked closely with the playing group during the pre-season.

“A lot of people picked them for the spoon this year. But I got to see the mental toughness of the team. That has been a weakness recently but as you’ve seen, it’s been a credit to the coaching staff and high-performance unit to bring that to the team. They played a top-four side (Parramatta) last week and played extremely well.”

Thurston said simple things were the catalyst for bigger changes. Professional athletes love schedules and certainty but North Queensland staff ensured the group never knew what training they would do, nor how they would be tested, for stretches of the pre-season. 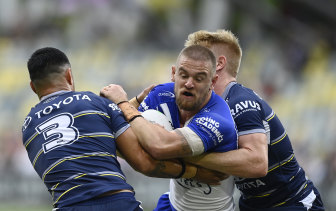 Bulldogs fullback Matt Dufty is stopped by Valentine Holmes and Tom Dearden, two of the Cowboys best in 2022.Credit:Getty

It kept them fresh and engaged in what can be a draining slog ahead of game one. Thurston feels that helped break down any barriers and brought them closer together as a group. “They are tight-knit and love to have fun,” he said. “But they also know when it’s time to work.”

And the steps forward taken by players like Tom Dearden, who has looked every bit the capable NRL playmaker at five-eighth, has been testament to a good coaching environment. Dearden has been somewhat of a pet project for Thurston and his progression has been savoured.

“Tom Deardon had a really tough start to his career, thrown to the wolves at the Broncos. I’ve worked extremely closely with Tommy and he’s starting to really understand when to pull the trigger. He’s moved from halfback to six, which suits his running game,” Thurston said.

“He’s doing well with knowing when to play short and long, taking on short sides, starting to really understand how to play out a game. He’s a strong defender, perhaps the fittest at the club and he’s come along very well. 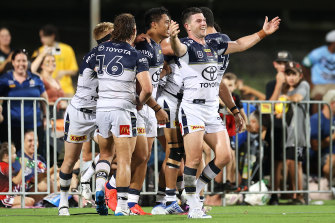 Chad Townsend and the Cowboys celebrate one of their six tries in the 35-4 shellacking of Parramatta last week.Credit:Getty

“Then there are the young back-rowers like Jeremiah Nanai. They just pinch themselves that this is their job, they are living the dream.

“They were just born to be rugby league players, they always have a smile on their face. Some kids are like that: Shaun Johnson, Cameron Munster, those types. Harry Grant. That is very infectious around the group.”

The Cowboys get another winnable game when they step out at Magic Round next Sunday, taking on the Wests Tigers to round out the weekend at Suncorp Stadium. Then a major test awaits when they return home to host the Melbourne Storm.

They will only need a competitive showing that night to convince any lingering doubters of their merit in 2022.

On current evidence, a spot in the finals is looking far more likely than a descent to the bottom of the ladder.