The Magpies are on the hunt for a new coach – and here is a list of contenders that their coaching sub-committee may consider. 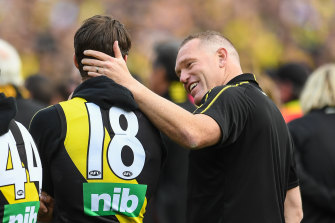 Has been a part of the Tigers’ premiership resurgence, having struggled in the top role at a difficult time in the Lions’ history with instability on and off the field.

Now in the media, he will only consider a return to a club if it’s in a senior position.

Played 170 matches with Port Adelaide, including the 2004 premiership, before becoming an assistant coach there. Has been with the Tigers since 2019. Is regarded as a good people manager with excellent tactical nous.

The former Magpies captain was beaten to the Eagles’ senior job by Adam Simpson in 2013. Had worked alongside Buckley and this year is Matthew Nicks’ senior assistant coach with the Crows.

Led the Power to a breakthrough premiership in 2004 before leaving in tumultuous circumstances. Played a key role in the early years of the Giants alongside Kevin Sheedy and has been praised for his development work at the Tigers and now the Demons.

Led the Lions into the finals in his first year in charge before a rash call on recruiting Brendan Fevola backfired. Was interviewed by the Blues after Brendon Bolton’s departure, a job eventually given to David Teague. Was also linked to North Melbourne’s vacancy last year. A big name the Magpies could gravitate towards.

Mitchell is off contract with the Hawks but Clarkson has a year to run on his deal. Still learning the ropes but is seen as a coach in waiting – whether that be with the Hawks or elsewhere.

Joined the top-of-the-table Demons as midfield coach having played 271 games for club, after holding various positions at the Hawks during their three-peat between 2013-2015 where he worked alongside Magpies football manager Graham Wright.

Interviewed for the Adelaide job at the end of 2019 and is keen to become a senior coach.

Has had success as an assistant wherever he has gone and played in premierships at the Brisbane Lions and Essendon. Appears entrenched at the Bombers but is a coach on the up.