Nathan Cleary has a get-out clause in his new $5.5m mega-deal with the Penrith Panthers that will permit him to become a free agent if his father, coach Ivan Cleary, is sacked by the club before the end of 2027.

The Herald first reported last month that Penrith had moved to secure the father-son duo on a long-term deal, with confirmation the pair had signed on for another five seasons after this year.

The Herald can now reveal that the contract contains a significant clause that could allow other clubs to strike before then.

Discussions around the player options in Kalyn Ponga’s Newcastle deal have dominated the headlines and proved an unwanted distraction for the Knights to start the year.

Ivan Cleary’s job could not be more secure after delivering the premiership last year and overseeing an unbeaten start to the 2022 season, the Clearys have all but guaranteed their future at the club by linking Nathan’s deal to his father.

It’s understood the Panthers board unanimously agreed to the terms of the deal when it was raised at the board meeting prior to the inking of the contracts last week. 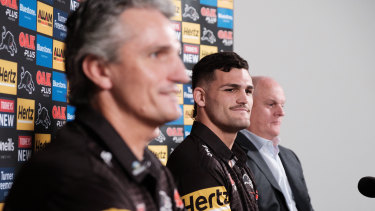 Ivan and Nathan Cleary re-signed with the Panthers earlier this month.Credit:Oscar Coleman

Under the terms of the agreement, Cleary will become a free agent if the board decides to terminate the head coaching contract of his father.

He won’t become a free agent if Cleary decides to retire or walk out on his contract, as he did when he left the Wests Tigers to link with Penrith in 2019.

If Ivan’s deal is terminated in the middle of a season, Nathan will not be allowed to leave the club until the end of that year.

While it seems unlikely that things would unravel in the next couple of years, there have been examples of teams struggling within a few years of winning a premiership in the past.

The Cowboys won the premiership in 2015 and plummeted within a couple of years, finishing 13th and 14th in 2018 and 2019 respectively, resulting in the sacking of coach Paul Green in 2020.

The Rabbitohs won the grand final in 2014, but by 2016 they were languishing in 12th and sacked coach Michael Maguire at the end of the following year.

Nathan spoke very highly of the club and his desire to remain at Penrith only last week.

“It’s pretty unbelievable, it’s hard to put into words,” Nathan said. “It wasn’t really that hard of a decision for me … I’m absolutely blessed to be at this club. I couldn’t picture myself anywhere else. I came here as a 14-year-old kid after following dad around. It’s home for me now. It means everything to me. To stay for longer now and be part of this community is really special.”