Home » Rugby » The biggest opposition threats on-field, and the COVID threat off it: AFLW captains preview 2022

AFLW players and officials are determined to kick the footy off on Friday, avoiding negative thinking around COVID and the rising case numbers on 2022 captains’ day, despite the likelihood that the effects of the pandemic will be felt this season.

After reports that some Collingwood players are isolating in accordance with health protocols, the notion that some teams will be stronger than others week-on-week is apparent for Melbourne skipper Daisy Pearce. 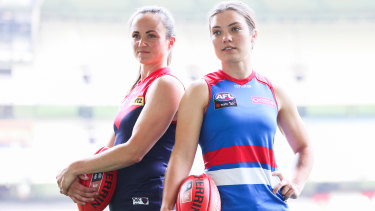 “There will be weeks where it’s unfair on one team more than another, depending on which players are missing,” she said. “But it doesn’t serve you very well to approach the season in that way.”

The league may provide medical and protocol support to players. But when asked if there would be additional financial support for players who contract COVID-19 and miss time off work at other jobs, a league spokesperson said the AFL would provide a “per diem” for players on the road, as agreed with the AFLPA, which was in place when the Giants were on the road in early 2021.

This highlights what Melbourne player Libby Birch wrote in a column with The Age on Monday that the options for protecting and supporting AFLW players are limited compared to their male counterparts, due to most contracts in the AFLW being casual or part-time.

COVID concerns aside, Pearce is keeping an eye out for the Brisbane Lions and sees the team as a “real threat” this season.

“I think Brisbane, who won it last year, finally should get some recognition and acknowledgement externally about their chances of winning. I can’t see them going backwards from where they’re at,” she said.

But Pearce’s attention is first on beating the Western Bulldogs in the battle for the Hampson-Hardeman Cup in their first game of the sixth season on Saturday.
The cup is currently held by the Bulldogs, and is named after women’s football pioneers Barb Hampson and Lisa Hardeman.

The Melbourne v Western Bulldogs game will also be key forward Tayla Harris’ debut in the red and blue after her departure from Carlton following a pay dispute.

“She makes our forward line better – we’ve sort of been lacking that big contested presence up forward over the last couple of years and [Tayla’s] definitely that,” Pearce said.

Richmond captain Katie Brennan and the rest of her team are looking forward to kicking off the season on Friday as they go toe-to-toe with St Kilda.

“We’re absolutely stoked to have the opportunity to have the season opener,” Brennan said.

And while star midfielder Ellie McKenzie is sidelined due to an injury, Brennan says it’s “fortunate” that McKenzie is the only player that won’t be available for selection.

“From memory everyone else is pretty good to go, it’ll be exciting to choose from a healthy list,” she said.

Also announced on captains’ day on Tuesday was the premiership cup presenter for 2022, which went to Hardeman, who is also a frontline worker, in addition to being a pioneer of the game. 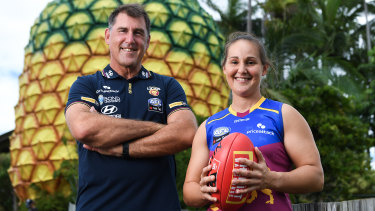 “With the last almost two years that we’ve had, I really want to represent the frontline workers and the emergency workers in the presentation of this cup,” Hardeman said.

Ahead of the season, all 15 captains also gave their predictions, with Melbourne voted the most likely to win the competition, boasting seven out of 15 votes.

While a bumpy season lies ahead, AFLW boss Nicole Livingstone said a “multitude” of scenarios have been planned for, with postponing games an option, to ensure the completion of the season and crowning a premier.

“Like many in the Australian community, we can’t wait for footy to return and we’re exceptionally proud that it’s women’s football that brings back 2022,” she said.