From the other side of the world and sitting on the end of a Zoom call, Mose Masoe flashes the grin Trent Robinson will never forget.

It’s well past midnight and Masoe has been in lockdown with his partner Carissa and their three children for months in the United Kingdom, but the gentle giant is at ease. 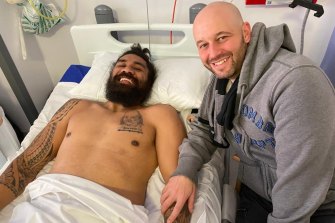 But in the meantime the Men Of League foundation has launched a “We Stand With Mose” appeal for the 31-year-old Samoan international, which will gain momentum this week both in Australia and the United Kingdom.

Very few know the steps Masoe is about to take, but Alex McKinnon joined the Super League winner to stress how important it was for Masoe to have financial support in place.

The RiseForAlex fund was established shortly after McKinnon’s catastrophic injury during an NRL match in Melbourne. In his own words, it bought him time to work out what was next.

‘It’s what makes rugby league so great; [that] we look after our own.’

“Five days ago was seven years since my injury and I truly believe the initial support I had and the ongoing support I had from my community made me who I am today,” McKinnon said. “It has given me the opportunity to have a beautiful family, a two-and-a-half year-old girl and twins on the way.

“It’s what makes rugby league so great; [that] we look after our own. You will have a direct impact on this guy’s life [by donating]. You will change his life and give him an opportunity for a new life.”

Before the Roosters’ World Club Challenge win against St Helens last year, Roosters players made sure they raised awareness about Masoe’s plight. They wore warm-up shirts with “Mose” on the back, all with his signature No.8.

Since then, improvement has been slow. If he has a good night with his bladder and bowel care, then the following day will be one of his better ones. But there are still so many unknowns.

“It’s absolutely humbling as a person and as a player to get this sort of help,” Masoe says. “I’m working hard and am happy with the small improvements I’m making, but the battle has just begun.

“The challenges ahead, I’m ready for it. It’s not just physical, it’s mental. It’s truly humbling and I’m thankful for everyone’s help.

“I’m looking forward to this weekend. I’m one of those people who don’t like to put my hand up. I’m trying to get better and see how I go.”

Donations can be made online through the Men Of League.