The Age approached either the chief executive or chair of all 18 clubs to take part in an anonymous survey covering the game’s big issues, and 16 clubs responded. In the first of a series, this is how the game’s most influential figures view the game midway through 2022. Come back on Sunday to find out who are the players most wanted by rival clubs.

Half of club bosses polled by The Age believe Gillon McLachlan’s successor should come from club land, while there is only lukewarm support for a 19th AFL team in Tasmania.

In response to a survey sent to the bosses of all 18 clubs, Richmond chief executive Brendon Gale emerged as a popular choice as the next AFL supremo, and a quarter of the 16 bosses who responded said they would support a Tasmanian team if an existing club relocated.

There was specific support among some clubs for Gale to take over from McLachlan with eight clubs specifying a club-based candidate should be appointed. Another six said the successor should just be the best candidate, whether they were chosen from club or AFL ranks. No club supported the notion that the next boss must come from withing the AFL executive. 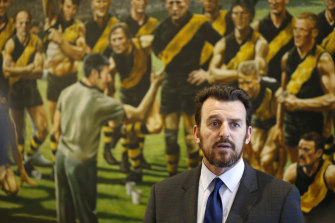 Richmond’s Brendon Gale is a favourite among clubs as a possible successor to Gillon McLachlan.Credit:Getty Images

The new chief will potentially face a divided industry over whether Tasmania should have been granted a licence for a standalone team, with six of the respondents supporting the introduction of a 19th team, four wanting an existing club to relocate and five wanting further information from those charged with developing the proposal before declaring their position.

One club boss said North Melbourne, who play four games in Hobart, should relocate despite the Kangaroos being adamant they are not moving and Tasmania saying they want their team to be a new club. 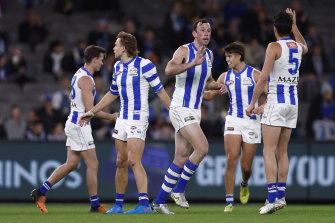 The Kangaroos are adamant they are not going anywhere.Credit:Getty Images

The AFL and the Tasmanian bid team are racing to develop a proposal 18 club presidents will support when they vote on the matter in August, with McLachlan emphasising that a new stadium is essential for the bid to succeed.

He wanted full support from clubs regardless of the rules around admitting a new team. One club boss suspected the AFL had positioned the process so that if the bid did not succeed, the clubs “would have blood on their hands”.

The survey also revealed the depth of unease within clubs about the level of gambling advertising in AFL forums, including the league’s website, signage and during broadcasts.

Eleven of the 16 bosses who responded said the level of gambling advertising was excessive, with one saying they found the exposure “personally offensive” and going as far as to say the league had “prostituted themselves” to the gambling giants.

“My biggest concern is it is changing how kids and teenagers watch and enjoy the game,” the club boss said.

The question of who will be the next CEO remains intriguing with one club boss using a colourful phrase to emphasise why the appointment needed to come from outside AFL house, saying it was “group think on steroids in there”.

More than half of the 16 club bosses who responded to The Age’s anonymous survey felt the game would be best served if the AFL appointed a candidate from the clubs, with 14 of the 16 respondents saying the candidate had to work within the industry. The bosses were given the opportunity to provide comments with their responses, which The Age agreed to report without identifying them to allow them to provide frank answers.

One club boss said Melbourne Cricket Club CEO Stuart Fox would, for example, fit the bill because he understood the game’s nuances as would people running media businesses despite not currently being employed at a club.

One club boss said the experience inside a club made finance, clubs and broadcasting executive Travis Auld’s performance better than CEO Gillon McLachlan and legal counsel and football operations executive Andrew Dillon, however the club that ranked the executive’s performance as poor questioned the capacity of the executive team apart from McLachlan.

The past two CEOs – McLachlan and his predecessor Andrew Demetriou – came from within headquarters while Wayne Jackson came from South Australia. Ross Oakley, a former St Kilda player, was working outside the industry when appointed.

With McLachlan set to complete a broadcast deal and collective bargaining agreement, determine the funding model and resolve the Tasmanian question, his replacement will need to confront many specific questions.

More than half of the club bosses believe nominated concussion or match attendances as the game’s most pressing issues. 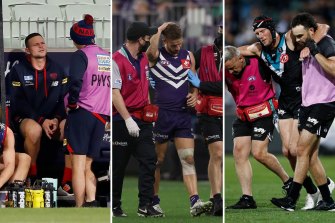 One club boss said concussion loomed as “an existential threat to the game” as people become more aware of the effect of brain injuries through collision sport.

The AFL is not only attempting to adjust rules and protocols to make the game safer, they also face the prospect of significant financial claims in the future. An NFL-style compensation fund is being discussed, and more investment made into research. This concerned another club boss who feared the impact rule changes would have on participation at the grassroots.

More than one club boss also expressed concern about the standard of umpiring at the elite level as the league becomes increasingly aware of the shortage in umpiring numbers.

All but two of the club bosses felt the crackdown on player dissent towards umpires had been a positive development for the game.

Of the two bosses who disagreed, one felt the intention of the crackdown was good but criticised its execution, arguing the inconsistent explanation and application had only served to increase the pressure on umpires.

Among those who supported the crackdown, one felt a 50-metre penalty was too high a price to pay for remonstrating with an umpire. Another felt restrained protest should be tolerated. “They are not robots,” a boss said. And another said the right balance had been found after an initial over-correction.

Clubs were split down the middle on whether the AFL’s funding model was fair or unfair.

An Age investigation  in March revealed that Geelong, Collingwood, Hawthorn and West Coast each received at least $100 million less than both expansion teams Greater Western Sydney and Gold Coast over the past decade. And they received more than $50 million less than St Kilda, who were the most subsidised of the Victorian clubs.

One boss said there should be more for expansion teams in non-traditional markets and less for Victorian clubs such as the Saints and Kangaroos. Another said clubs were penalised for good governance while others were propped up with no incentive to improve.