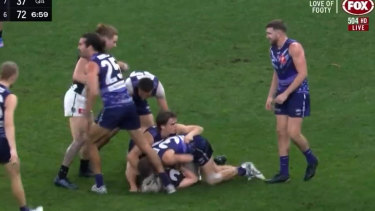 Switkowski rubbed out for two weeks for ‘chicken wing’

Fremantle’s Sam Switkowski will miss the Dockers’ crucial road trip to take on Melbourne after he was suspended for two matches for his ‘chicken wing’ tackle on Collingwood’s Jack Ginnivan.

The Dockers referred to similar incidents involving Chris Judd, Jack Riewoldt and Joel Selwood in their bid to persuade the tribunal that Switkowski, who pleaded guilty, should be handed a “substantial” fine instead of the “starting point” of a two-game ban called for by the AFL.

There was added dramatic tension when tribunal chair Jeff Gleeson’s feed froze as he was reading out Switkowski’s penalty.

Switkowski will also miss the Dockers’ vital clash with Brisbane in a further blow to the club’s top-four prospects after two shock losses in the past fortnight.

Representing the Dockers, Seamus Rafferty QC conceded Switkowski’s act was “unacceptable” but said there was no malice.

The Dockers said the case involving Riewoldt in 2019, where he was fined $1500 for the lower charge of misconduct for his tackle on Bayley Fritsch, was the most relevant to Switkowski.

Selwood was offered a one-match suspension for his dangerous tackle on North Melbourne’s Sam Wright in 2015, while Judd was banned for four matches in 2012 for his tackle on North’s Leigh Adams.

The AFL said those incidents were not relevant comparisons as Switkowski’s repeated lifting motion of Ginnivan’s arm and his position on top of the Magpie constituted a more serious transgression than the Riewoldt and Selwood cases.

Andrew Woods, for the AFL, said a minimum two-match ban should apply to send a message to the football community that Switkowski’s act was “unsportsmanlike”.

The tribunal panel of Gleeson, Paul Williams and Wayne Henwood agreed, but considered the player’s guilty plea and a strong character reference from Dockers football boss Peter Bell in not handing out a heavier penalty.

“We consider the way in which Switkowski maneuvered Ginnivan’s arm … was intentional, unsportsmanlike and dangerous,” Gleeson said.

“It clearly had the potential to cause injury and significant injury to Mr Ginnivan’s shoulder and or elbow given the two movements and the extent to which Mr Ginnivan’s arm was forced upwards. It was surprising no injury resulted.

“This was not just an act of misconduct, but admitted to be an act of serious misconduct. In our view, the appropriate sanction is a two-week suspension.

“It will be apparent that, in the absence of a comprehensive guilty plea, the sanction would have been higher.”

Higgins makes progress in return from concussion, only to enter protocols

St Kilda forward Jack Higgins will miss at least one more game after being ruled out of the Saints’ clash with North Melbourne due to health and safety protocols.

Higgins missed the Saints’ win over Adelaide due to concussion and is making “good progress” in his recovery, but the club has not placed a timeline on when he will be able to return.

The livewire forward has been instrumental in the Saints’ rise this season with 16 goals from eight games, two of which he had minimal involvement due to concussion. 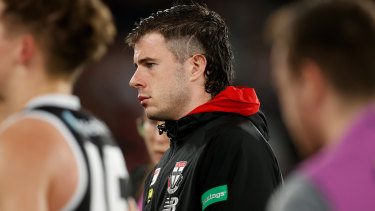 The Saints have the bye next week before taking on the Brisbane Lions in round 13 at the Gabba.

Carlton defender Caleb Marchbank, meanwhile, has avoided damage to his knee after an injury scare on the weekend.

The unlucky backman did not play in the second half of the Blues’ VFL game against Sandringham on Sunday after a clash of knees in the second quarter.

Scans cleared Marchbank of any injury and he remains a chance to take to the field this week in the VFL. If not, he will be available to play the week after the Blues’ AFL/VFL bye.

The latest issue is not to the knee he had reconstructed last year. The highly talented Marchbank last played an AFL game in round 16, 2019 but has since been plagued by serious neck and knee injuries.

The Blues are thin on tall defenders, having lost Mitch McGovern, Oscar McDonald and Luke Parks to long-term injuries, while Liam Jones retired last year after refusing to be vaccinated against COVID-19.

Jack Martin and Jack Newnes are both in contention to return from injury to face Collingwood on Sunday.
Uncapped ruckman Alex Mirkov will miss a week after hurting his ankle late against the Zebras.

I love ‘Nobes’ as coach: Ziebell

Jack Ziebell has reinforced that he has “no concerns whatsoever” about David Noble’s position as coach of North Melbourne.

Ziebell said on Tuesday that the playing group remained committed to Noble and the system he is implementing at the club.

“I love ‘Nobes’ as a coach, he’s created one of the safest environments at our footy club over the last 18 months, there’s that much learning going on here inside the four walls, it’s really impressive to see,” said the Kangaroos’ skipper.

“I get the sentiment from the outside, [with] the way he goes about it. But the way, for me, he’s been coaching has been fantastic. He’s extracting plenty out of our group, he’s providing plenty of opportunities for our players to learn, and we’re learning plenty of lessons now that are going to hold us in really good stead in the next 12, 18, 24 months.”

Ziebell added that he felt “fortunate” to be able to have represented the club in 250 games, a milestone he will celebrate this Sunday against St Kilda.

“I didn’t think in my wildest dreams I would get to this point in my career,” he said. “It’s been a great journey and I’ve had some fantastic memories along the way, and [there’s] hopefully a few more coming through.”