Dynamic midfielder Justin McInerney has signed a four-year contract extension with the Swans as they build towards another era as consistent finalists.

The 21-year-old dashing wingman and half-back is among the best of a new breed of Swans who have revitalised the club after they sank into the bottom half of the ladder in 2019 and 2020.

It was the first time the Swans had missed the finals in consecutive years since a lean period from the late 1980s to the mid-90s.

McInerney has been a key contributor to the Swans making the finals last year and sitting fifth on the ladder this season despite Sunday’s loss to second-placed Brisbane.

He shone last season, earning a second AFL NAB Rising Star nomination to finish fourth in the award and claimed the Swans’ Dennis Carroll Award for Most Improved Player. 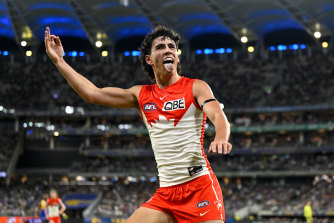 Justin McInerney has re-signed with Sydney for another four years.Credit:Getty

“Justin has impressed us with his hard running and versatility and is developing into an important part of our young midfield group,” he said. “He has an excellent feel for the game and is continually learning and working hard to improve.

“Justin is a quality young man and brings a fantastic energy with him wherever he goes, both on and off the field. We’re all looking forward to watching him continue to grow and improve his game in the years ahead.”

McInerney said he was always keen to stay with the Swans.

“It’s such an exciting time for our club with our mix of senior leaders and younger guys coming through. I’m really looking forward to what’s to come in the next few years.

“I just want to continue to play my role, whether that’s playing outside or moving inside, I’m happy to play wherever the team needs me.

“It’s just such a special club to be a part of, we love playing with each other and we love playing for each other. People talk about the Bloods culture, and it rings true. I’m really looking forward to spending the next four years here.”