Sydney have steered their AFL season back on track, thumping a woeful Essendon by 58 points on Saturday night to soothe a fortnight of mounting concerns and heap more pressure on Bombers coach Ben Rutten’s shoulders.

This wasn’t a thriller like so many of the recent clashes between these two sides – in fact, it was pretty easy viewing for Swans fans who had to suffer through back-to-back home defeats against Brisbane and Gold Coast in the preceding two weeks.

If anything, they let the Bombers off the hook with their inaccuracy in front of goal. Lance Franklin, Tom Papley, Will Hayward and Isaac Heeney combined for 11 behinds between them. The 27,464 at the SCG lapped up the 14.21 (105) to 6.11 (47) win anyway, even if a prime opportunity to boost their percentage was wasted. 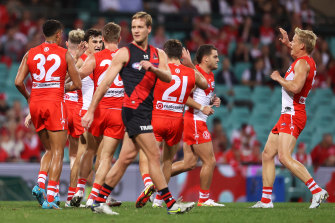 The Bombers took another hit at the SCG. Credit:Getty Images

For Essendon, who were held to just two goals after half-time, it was far worse than what the scoreboard would suggest. They had no answers. At times, it was as if they didn’t even understand the question. Last week’s win over Hawthorn can now only be seen as a false dawn.

The Bombers had Dyson Heppell’s 200-game milestone to play for, and honour, but shirked the physical battle, with the Swans dominating the tackle count 54 to 30 – and, consequently, all other aspects of the match. They were flat-footed, disorganised, and played right into Sydney’s hands.

The only real fight the visitors showed was in Jye Caldwell’s courageous attempt at marking against the flight of the ball late in the third quarter – and in the mini-melee which broke out after his heavy collision with Tom McCartin, who was running the other way. Caldwell was taken off for a concussion test and then went down into Essendon’s rooms, before being subbed out for Alec Waterman. 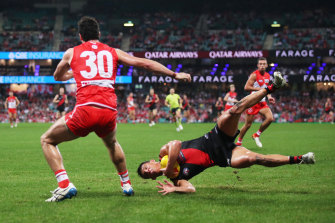 Actual highlights for Essendon, now 2-7, were few and far between – although Peter Wright’s sensational set shot from 65 metres out in the second quarter should make the end-of-season packages.

Much has been made of Sydney’s sluggish starts this season – an issue coach John Longmire admitted was costing them wins and had to be addressed. Consider that box ticked. They were energetic from the outset, grabbing the opening goal through Sam Wicks and finishing the first term with four in a row. Wicks, who was playing his first game since round three, capped off that chain with his second major, just before the quarter-time siren, to give the Swans a handy and deserved 20-point lead.

Sydney may have had problems with their forward 50 efficiency at times this season, but they were cutting through Essendon’s defensive system with ease. Franklin, too, was at his freewheeling best, crumbing packs, kicking goals (2.4) and setting up his teammates (four score involvements) against a team he rarely shows any mercy towards.

Luke Parker’s goal in the second term, which blew Sydney’s lead out to 42 points, told the story of the night. Not only was it way too easy for the Swans co-captain – who danced straight out of the centre bounce, swept past an opponent and kicked magnificently from the edge of the square – but he openly mocked Dylan Shiel afterwards, feigning fear as if to suggest the under-fire Bombers star was too scared to lay a tackle or imprint his will on the match.

Another Sydney goal, in the third quarter, told it a different way. On three separate occasions, Swans players fumbled the ball inside their forward 50 but still had time and space to recover and keep it moving – only because of the complete lack of pressure from Essendon. Tom Papley ended up snapping a goal over his head. The rest of the game, as you’d expect, was a procession.