The Sydney Swans are scrambling to gain exemptions to resume training on Tuesday and travel to Melbourne for their match this weekend after the AFL club was caught up in the latest COVID-19 outbreak in Brisbane.

The Swans are due to face Richmond at the MCG on Saturday, but because they opened the new season with an away fixture in Brisbane, they will spend the next three days observing the same lockdown measures as people in the greater Brisbane area. 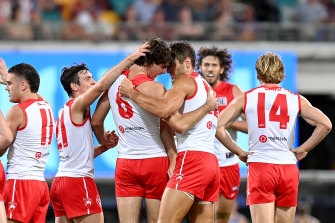 The Swans have been caught up in the latest COVID-19 outbreak.Credit:Getty

Whether the team will be able to train as planned during that period is subject to approval from NSW authorities, a club spokesperson said.

Late on Monday, a public health order was issued instructing people who have been in Brisbane since March 20 and were now in NSW to observe the same restrictions as those north of the border.

Sydney notched their round-one win over the Brisbane Lions at the Gabba on that date, with players and staff who went on that trip now ordered to stay at home except for the usual four ‘essential reasons’, which includes work.

A club spokesperson said the Swans were now assessing the implications of the public health order.

“Sydney Swans players and staff who travelled to Brisbane in round one are abiding by NSW Health orders,” the spokesperson said.

“The club, along with the AFL are working closely with the relevant authorities and we continue to prepare for this Saturday’s match against Richmond at the MCG.”

The AFL has already acted quickly in response to the outbreak in Brisbane, with the Lions’ clash with Collingwood on Thursday night shifted from the Gabba to Marvel Stadium, while the Gold Coast Suns will fly into Adelaide on Tuesday morning to minimise any possible risk.

Speaking earlier on Monday before the public health order was issued, coach John Longmire said that the Swans were taking guidance relating to their Brisbane trip from the NSW government, and that the latest cluster of positive cases was a reminder of how quickly the pandemic could move.

“There’s no point projecting in this environment. You move with it. We did last year and we move with it now,” Longmire said.

“If you get notified at the last minute that things have changed, you just move with it pretty quickly, because you have to. And that’s OK, everyone’s accustomed to that last year. We went on a plane last year and we didn’t know where we were going and certainly how long we were going for. We’ll adjust if need be.”