Sam Reid has owned up to his share of the blame for the play that ended Sydney’s undefeated start to the AFL season, as the versatile tall braces for more time in the ruck over the next two months.

The Swans suffered their first loss of the year in Saturday’s two-point derby defeat to Greater Western Sydney, who snatched the result at the death courtesy of a last-gasp Josh Kelly goal after a ball-up deep in their attacking 50. 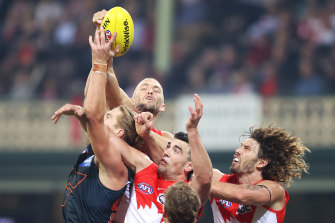 Sam Reid (back) is ready to spend more time in the ruck if required after Tom Hickey’s injury.Credit:Getty

Having lost Tom Hickey to injury earlier in the final quarter, Reid was thrown into the ruck and chose to tap the ball into space at the decisive stoppage – only for an unmarked Kelly to swoop in and snap the six-pointer that sealed the victory.

“I made the call, I’ll wear it,” Reid said on Thursday. 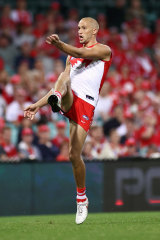 Sam Reid of the Swans.Credit:Getty

“I hit it outside, could have kept it a bit tighter. That’s just one play of the last few minutes, but I’ll wear it. To be honest we didn’t review that one stoppage too deeply, Kelly was able to kick a pretty handy goal and he’s a pretty special player. There’s a whole system in place, it’s not often about highlighting individuals. We just got a couple of things wrong but we’ll learn from it.

“We’ve got to be careful in those situations, but [you] live and learn.”

With Hickey suffering a knee injury (PCL) and facing two months out, Reid is expecting to spend more time in the ruck, but not too much given fellow forward Lance Franklin (bone bruising) is also sidelined for the next four weeks which has left the Swans short on tall attacking options.

“My role in the team for years now has probably been a little bit flexible,” he said. “I expect to pinch-hit in the ruck or spend a bit more time there if required like it was on the weekend. I’m happy to do that, I need to be open to that.”

Ruckman Callum Sinclair and key-position player Hayden McLean, who has played the weeks when Franklin has been rested and has previously served as a back-up ruck for Sydney, loom as the obvious replacements for Saturday’s clash against the Gold Coast Suns.

The Swans are expected to make at least one additional change with midfielder James Rowbottom ready to play his first AFL match since round one after fully recovering from a knee injury – while Tom Papley could also be in doubt, having spent the majority of Thursday’s training session away from the main group.

After a dream start to the year, the next few weeks shape as a stern test for Sydney, with co-captain Dane Rampe (broken finger) and livewire forward Isaac Heeney (broken hand) also out for at least one more week each.

The Swans will be warm favourites to account for the Suns, who are struggling through their own injury crisis, but face Geelong (home), Melbourne (away) and Collingwood (home) after that.

“But we don’t base our game on individual brilliance so much, it’s more just guys coming in, everyone being really clear on what they need to do once they’re in the side.

“Hayden McLean and others have shown they can do it … he’s come in and out a couple of times this year and each time he’s come in he’s played a really strong role for us and played good footy.