Geelong midfielder Brandan Parfitt played out the bulk of the grand final with a broken thumb.

Parfitt received medical attention to his hand during the first quarter of Saturday night’s bruising season decider. After being tended to by Cats medicos, the young onballer returned to the field and ended the match with seven disposals and seven tackles as his side was overrun by Richmond by 31 points. 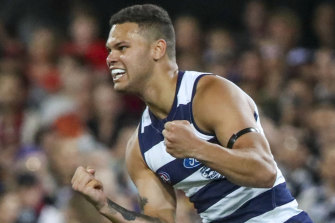 Brandon Parfitt will have surgery on his hand.Credit:Glenn Hunt

But according to sources close to the situation, when he was assessed in the days after the game, it emerged that Parfitt had suffered a fracture in his thumb. Parfitt was due to undergo surgery this week to repair the break, but it is not expected to hinder his preparation for the 2021 season. The Northern Territorian has re-signed with the Cats on a two-year deal and is determined to remain with Geelong despite being targeted by Greater Western Sydney for a trade deal involving restricted free agent Jeremy Cameron, who has walked out on the Giants and wants to join the Cats.

Geelong have already started making changes to their list, with James Parsons, Jacob Kennerley and Blake Schlensog all informed that their contracts would not be renewed for 2021.

Assistant coach James Rahilly will also depart the club to take up a role with Adelaide.

Injury-riddled speedster Nakia Cockatoo is out of contract and poised to join the Brisbane Lions on a multi-year deal, while fringe youngsters including Quinton Narkle, Jordan Clark and Charlie Constable, the latter two contracted for 2021, have also been linked with moves away from the club after being squeezed out of a strong outfit that is also set to be bolstered by the addition of Shaun Higgins from North Melbourne next year.

Gary Ablett has retired, while the futures of veteran backmen Harry Taylor and Lachie Henderson remain unclear. A new deal for Tom Hawkins has not yet been announced but it is widely expected he will stick with the Cats for another two seasons.

Playing out grand finals with injuries is not unprecedented. Indeed, Parfitt wasn't the only man on the ground to battle on under duress, with Tigers veteran Bachar Houli fighting on and finishing the game despite tearing his calf.

Houli told Triple M after the game that his calf had "popped" early in the first quarter but that Richmond coach Damien Hardwick urged him to play out the match following the concussion suffered early in the game by Nick Vlastuin.

Ablett (shoulder), Sam Simpson (concussion) and Nathan Broad (head) were also worse for wear following incidents during a taxing finale to the season at the Gabba.

In 2016, indefatigable Western Bulldogs defender Dale Morris played the entire finals series with a fracture in his back, an effort that further entrenched his position in Bulldogs' legend.