Australia have outlined their plan to ‘shut the Pommies up’ by hitting England with the same intensity of this week’s bruising State of Origin fixture.

The nation has been gripped by the thrilling rugby league series, which ended with Queensland clinching victory over New South Wales on Wednesday night.

England’s players booked out a room to watch the game on big screen and Wallaby winger Suliasi Vunivalu, who made his name in league, wants to replicate the ferocity. 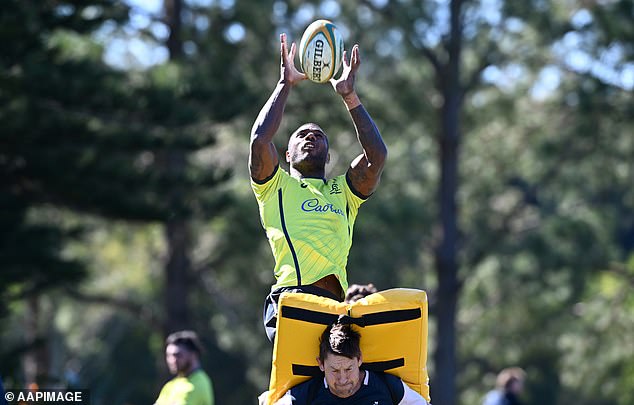 ‘Last night, watching that game made me look forward to our big game with that intensity right from the start,’ said Vunivalu.

‘We have been lacking that with the Wallabies for our first 20 so if we can bring that up and shut the Pommies up we’ll do a good job.’

Vunivalu has been named on the bench for Saturday’s decider, when he is set to make his Wallaby debut. Australia have been ravaged by injuries in the opening rounds, missing seven players for the final Test. 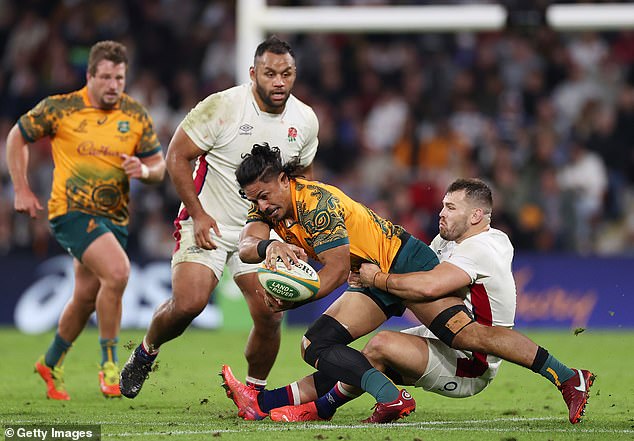 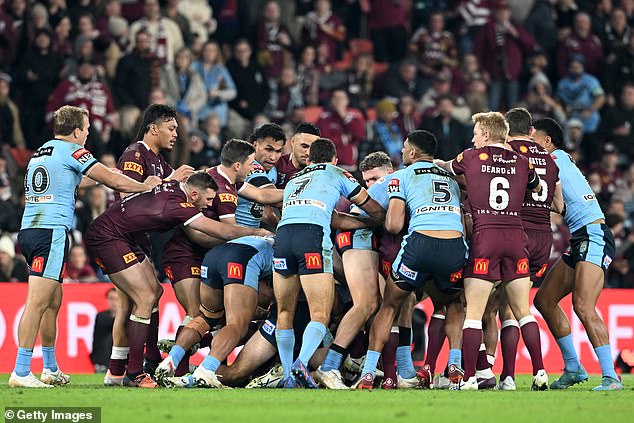 ‘Just thinking about the last couple of weeks, Suli will probably be on after about three minutes! It’s been a pretty brutal series so far, as injuries on both sides would tell us. He is covering a fair number of spots. We certainly want to give him reasonable time, but we’ll do what’s best for the team on the day.’ Harry Wilson, Nick Frost, James Slipper and Reece Hodge have all been drafted into the team. And coach Dave Rennie has rallied his players to deliver a response to the Brisbane defeat when they step foot on the Sydney Cricket Ground.

‘It’s massive,’ said Rennie. ‘We’re well aware of that. We were disappointed last week and we’re better than that. There’s no doubting the character of this group and we will fight. We’ve been very happy with how we’ve controlled big parts of the second half, but we have to start better. We gave England such a big start in the last game and they’re too good a side to be given that sort of advantage. We have to be better and we will be.

‘It’s going to be pretty cool and it may be the last time, with the football stadium opening. The first Wallaby Test was played there against the British Isles and now maybe the last Test there against England so that would be a fitting finish for the SCG. With a full crowd there, it will be fitting for a big occasion; one-all going into a decider.’