By the time a breathless Parramatta side limped into the dressing room at Suncorp Stadium after their comeback win over the Broncos, coach Brad Arthur was already reminding them of their next assignment.

The 24-16 win by the Eels didn’t look particularly flattering on Friday night and there wasn’t much gloss left on Saturday. Arthur praised their character to come back from 16-0 down but it was against a team that was the worst side in the NRL last season and had been reduced to a one-man bench through injury. 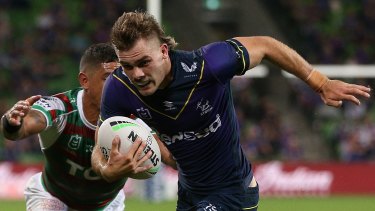 Ryan Papenhuyzen and the Storm sent a clear message to the rest of the NRL with their excellent win over South Sydney.Credit:NRL Photos

“That’s what we have to work on next week. It’s a short turnaround and we play next Thursday. We’ve got to learn pretty quick. We have to be on our toes.”

Arthur accused his players of trying to be too cute against the Broncos instead of working hard through the middle to set themselves up for the contest. Mahoney agreed and said things felt far more controlled when they returned for the second half and pummelled away behind Junior Paulo and impressive bench recruit Isaiah Papali’i.

“The second half was how we wanted to start the first half. The first round … I think everyone was excited to get out there and play,” Mahoney said. “Everyone was on edge and wanted to play footy. We know we can score points but sometimes we need to hold the ball. We were able to turn it around and come away with a win.”

The Broncos held their breath overnight after Xavier Coates and John Asiata were both sent to hospital during the match for scans on suspected neck injuries. But there was good news on Saturday with both being cleared of serious injuries, although it’s unknown when they will be available to return.

Brisbane’s head of performance Andrew Croll said Coates had improved on Saturday after he landed in an awkward position after diving to score a try in the corner.

“Xavier still has a sore neck but his scan was clear and he has improved today [Saturday],” Croll said. “John Asiata also received a clear scan but is still experiencing neck soreness.

“Both Xavier and John will be assessed in the coming days to determine if they will be available to play but player welfare will be paramount in any decision made.”

Prop Matt Lodge was due to have scans on a hamstring injury on Monday but the Broncos are expecting him to be out for one to two weeks.