The worst thing about a 10-day build-up to an Origin opener is you have too much time to flip-flop about how it will play out.

When Queensland got the band back together with Billy Slater, Cameron Smith and Johnathan Thurston taking over as coaches, there were ominous signs for the Blues. But they’re coaching, not playing, so they can’t really negate the magic of Penrith halves Nathan Cleary and Jarome Luai, who both work in perfect harmony with ball-playing lock Isaah Yeo. That combination was fundamental to the Blues and Penrith’s success last year and will be again this time. The packs cancel each other out, although I expect NSW prop Payne Haas to swing like a wrecking ball through the Queensland defence. NSW by 8. You heard it here first.
Andrew Webster 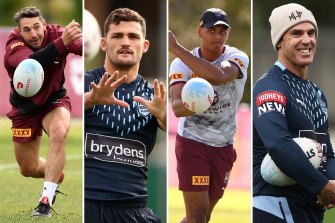 There was a belief last year that no matter what Queensland threw at NSW, they didn’t have the firepower or stomach under ex-coach Paul Green to match it with the Blues. Unfortunately, that feeling is gone. There’s something about seeing Slater in Maroons colours that strikes fear into many south of the border. Sadly, Queensland will head to Perth with a 1-0 advantage in the series. Don’t underestimate the loss of Tom Trbojevic. He produced one of the greatest individual Origin performances to open last year’s series and will be dearly missed. Queensland by 2.
Michael Chammas

Billy Slater’s arrival as coach feels akin to Brad Fittler’s appointment at the Blues four years ago. He has backed in-form players to take advantage of a NSW outfit missing some of its most lethal weapons. The absence of Latrell Mitchell and Tom Trbojevic is a massive blow for the hosts, who will return to Sydney Olympic Park for the first time since 2020. Nathan Cleary holds the key for the Blues. They will rely on his kicking game – which is the best of any playmaker in the NRL – and a Penrith combination of Cleary, Isaah Yeo and Jarome Luai to steer the ship. Yeo will have a blinder and ask plenty of questions of the Maroons defence. NSW by 4.
Caden Helmers 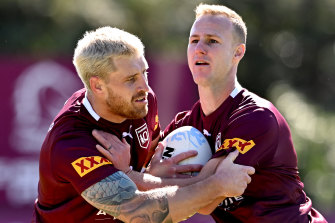 There’s a lot to like about this Queensland team. Billy Slater has gone chips-in with players in good form, regardless of age or experience. That’s the right play and they will get every chance to deliver in game one behind a quality middle rotation with Josh Papalii and Tino Fa’asuamaleaui at the vanguard. Expect Daly Cherry-Evans to find his best touch quickly and Cameron Munster to be the best player on the field. NSW have obvious class and it all runs through their Penrith connection of Yeo-Cleary-Luai. But injuries to key figures have left them vulnerable. Qld by 12.
Phil Lutton

The arrival of Billy Slater and the injection of fresh blood like Selwyn Cobbo and the in-form Reuben Cotter was enough to put every NSW fan on edge. After all, the Blues were already missing key strike weapons Latrell Mitchell and Tom Trbojevic. But then you watch the Blues train and realise there are no fewer than six Penrith players in the side. This is the same club team on track to win another competition. Nathan Cleary is on top of his game. James Tedesco remains the best player in rugby league. And Payne Haas and Junior Paulo are dynamite up front. Provided the bench hold the fort in the middle of the game, the Blues should be sweet. NSW by 4.
Christian Nicolussi

There are so many reasons to be worried if you’re a Blues supporter. There’s no Tom Trbojevic or Latrell Mitchell and it makes no sense for Jack Wighton to replace one of them (surely he’s the bench utility and Stephen Crichton starts at centre). There’s also the Queensland brains trust of Billy Slater, Johnathan Thurston, Cameron Smith and Cooper Cronk, all reuniting to torment us yet again. But if there’s one factor that provides hope, it’s the selection of the in-form Penrith connection. There are half-a-dozen Panthers, but it will be Nathan Cleary, Jarome Luai and Isaah Yeo in particular who will take control and be the difference in a willing contest. The fact they are playing at home for the first time in two years is also a huge advantage. NSW by 4.
Adrian Proszenko

Watch the State of Origin series exclusively live and free on Channel 9 and 9Now.