Andrew Johns: Why NSW will beat Queensland in the Origin decider

All these words and feelings sum up Suncorp Stadium and make it the worst place possible for NSW to win a deciding State of Origin clash.

But rugby league Immortal Andrew Johns is sure the Blues players wouldn’t want it any other way. What a great challenge.

Johns says there will be nothing in this decider at The Cauldron. The Maroons will be better than the second half of game two when the Blues ran away with it.

Here’s why Johns believes the Blues are primed to do what so few have done before.

Everything you need to know before Origin III

The Blues’ 44-12 thumping of the Maroons in Perth last month set up game three in Queensland as the series decider for this year’s State of Origin.

Blues coach Brad Fittler shook off the woes that plagued the team in game one, and goes into Wednesday night’s clash at Suncorp Stadium with a side very similar to the one that claimed victory in Perth.

The opposite is true for Maroons coach Billy Slater, who watched his team unravel in Perth after an onslaught from Nathan Cleary and Matt Burton.

News came late last week that the Maroons camp had been plagued by COVID-19, with game one man of the match Cameron Munster and Murray Taulagi ruled out of game three.

Billie Eder checks in with everything you need to know right here.

Good evening folks and welcome to the State of Origin series decider.

Brad Fittler’s Blues are looking to do what only two NSW teams have done before in winning a series decider behind enemy lines in Brisbane. The Blues are favourites against a Queensland side missing its heart and soul in Cameron Munster.

You can watch the State of Origin decider exclusively live and free on Channel 9 and 9Now. Coverage starts at 7pm, with kick-off scheduled for 8.10pm.

Caden Helmers, Tom Decent, Dan Walsh and Billie Eder are bringing you all the updates, scores and news as it happens at Suncorp Stadium tonight. 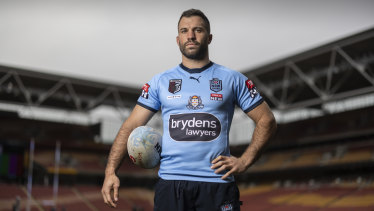