Stan Sport will play host to a three-week-long feast of international rugby from Sunday following the news the streaming service has secured the rights to the 2021 Autumn Nations series.

A total of 20 matches will be broadcast, which includes every game of The Rugby Championship outfits Australia, New Zealand, South Africa and Argentina’s respective spring tours.

By the time the series wraps on November 22 when Ireland host Argentina, Stan — owned by Channel Nine, publishers of this masthead — will have screened matches featuring each of the world’s top 10 rugby nations.

The Wallabies have already won five straight Tests including back-to-back wins over the world champion Springboks, the first time since 2008 they have achieved the feat in a non-World Cup year, and will look to bolster that record in matches against Scotland, England and Wales next month.

“This is a huge result for Australian Rugby fans, to now be able to watch the Wallabies all year round on Stan Sport,” Wallabies captain Michael Hooper said.

“The Spring Tour matches are always special occasions, the atmosphere at the stadiums is electric, and they are always great games of footy. 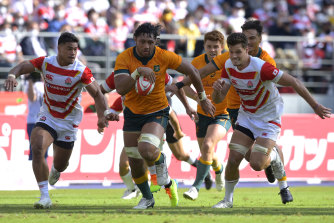 The Wallabies head for the UK on the back of five straight wins, including a last-start 32-23 victory over Japan in Oita.Credit:Getty

“It’s been a great year for rugby in Australia, and the partnership with Stan Sport has helped immensely from the community level right through to Test matches.”

Hooper’s side have been in turmoil this week following the news Japan-based trio Quade Cooper, Samu Kerevi and Sean McMahon would not be flying to Europe.

Resurgent five-eighth Cooper, who plays for Kintetsu, and Suntory pair Kerevi and McMahon will instead remain in Japan to focus on preparations for the upcoming League One (formerly known as the Top League) season.

The Wallabies’ first match of their European swing is against Scotland at Murrayfield from 1am AEDT on Monday, November 8.