Snap Shot is a weekly column taking a look at the lighter side of football.

It’s not uncommon for AFL coaches to spruik the importance of getting outside Australia in the off-season to collect a bag of ideas that will help their club; former Hawthorn coach Alastair Clarkson is exhibit A for such behaviour.

Of course, most of us thought this was a recent phenomenon until a copy of a fascinating piece of correspondence landed on Snap Shot’s desk last week.

That correspondence was between the late South Melbourne coach Alan Miller and the guru of all coaches, Vince Lombardi, who was in charge of NFL team Green Bay.

Miller became the Swans’ coach in 1967 after coaching their under-19s for many years, taking over from triple-Brownlow medallist Bob Skilton, who had been the playing coach.

Not able to afford a study tour of the Green Bay Packers – as Clarkson has managed in 2022 – Miller wrote a letter to Lombardi seeking advice and received a response just two weeks after the legendary coach had led his team to victory in the first Super Bowl. 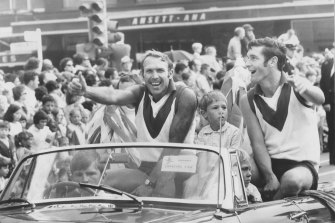 The letter to Miller from Lombardi, dated February 2, 1967, opened with: “Your interesting letter has come as quite a surprise. You are to be commended on your sincere efforts to prepare yourself and your team for the 1967 football season and to re-establish your club as a leader in the Victorian Football League.”

Lombardi then answered Miller’s questions in turn, starting by telling Miller the rubbing down of players seldom happened in the NFL and never on game day.

Lombardi then outlined the fact pre-season consisted of three weeks of practice, twice a day, enclosing a pamphlet describing the Exer-Genie exercise tool, which had been invented in 1961 to help astronauts stay fit in space. He emphasised the team’s calisthenics program before moving into football fundamentals.

In an indication of where the NFL was at in 1967, Lombardi wrote about the squad meetings held every evening during pre-season “at which time we discuss all of the different phases of the game and show moving pictures of previous games and practices. We make extensive use of moving pictures in our teaching.” 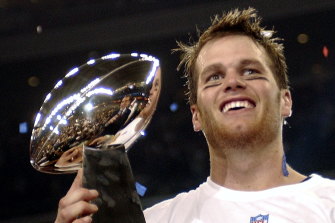 The Vince Lombardi Trophy is awarded to the team that wins the Super Bowl each year. Tom Brady, pictured here, has won seven titles.Credit:AP

Former Swans players don’t recall anything as high-tech as moving pictures, but they do remember a blackboard being used before every game and on one occasion a photo of an opposition player who had to be stopped being pinned on board. When Miller told them they “would rise like a phoenix from the ashes” before one game, the line stuck among teammates who found it very amusing to throw it out there in all sorts of situations.

Miller had obviously referenced Lombardi’s 1963 book Run to Daylight in his letter to the coach, as the book that detailed a week in the life of the NFL club was referenced in the response as well as the use of wind sprints on regular turf being essential.

Miller, who served in the navy before becoming an accountant working at the Australian Broadcasting Corporation, obviously made good use of the intel, winning three of his first four games as coach.

Unfortunately, he could not keep the form going; the team won just eight of his next 34 games. South Melbourne wanted Miller to keep coaching, but he pulled the pin at the end of 1968 as combining the job and his professional life was proving too difficult.

Brownlow medallist Peter Bedford, who made his debut under Miller, remembers his first VFL/AFL coach mentioning Lombardi occasionally in his addresses to the players, with the famous line “winning is a habit” getting a run.

Nick Daicos yet to enter the Wayne Campbell club

On Saturday, Nick Daicos, at 19 years and 194 days, became the youngest player to kick three goals or more and have 40 disposals in a game. He eclipsed the 30-year-old record held by former Tiger – and current Gold Coast football manager Wayne Campbell, who was 19 years and 278 days old when he set the record.

Contacted by a few friends to ensure he’d noticed his record disappearing, Snap Shot is told Campbell was quick to remind them he still held the record for being the youngest player to have 41 possessions and kick four goals in a game (as he did on that day against Carlton in round 15, 1992). 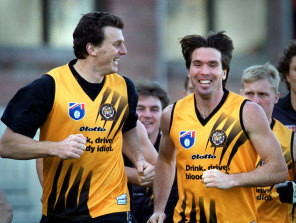 Wayne Campbell and Brendon Gale at a Richmond training session in their playing days. Credit:Vince Caligiuri

Not only that, but he had also started the game tagging Carlton champion Craig Bradley, who was 150 games into his career by then.

That is some sort of exclusive club, with Campbell its only card-carrying member, and is one the precocious Daicos will find impossible to join.

You would think Hawthorn’s Dylan Moore would have attracted as many headlines as Collingwood’s Jack Ginnivan after winning 38 free kicks so far in 2022 and conceding just four to have a 65-13 record since the start of last season.

The 22-year-old is not bad at earning free kicks for high tackles, having kicked three goals for Box Hill in the 2018 VFL grand final from head-high free kicks. But he does so in an understated fashion.

It’s also not his only method: just 10 of his 38 frees have come in that fashion in this season (10th on the list in 2022) while 17 of the 26 free kicks Ginnivan has received (and Pies supporters might claim 32 of the ones he hasn’t) have been for head-high contact. Moore has laid 67 tackles compared to Ginnivan’s 25 as he delivers a breakout season for the Hawks.