Check back in for updates through the day

The Western Bulldogs are attempting to help Bailey Smith restructure his life, according to coach Luke Beveridge.

“He’s going OK ,” Beveridge said after the Bulldogs defeated the Giants by 20 points at the Sydney Showgrounds on Saturday night. “He trained on Friday with our rehab group. 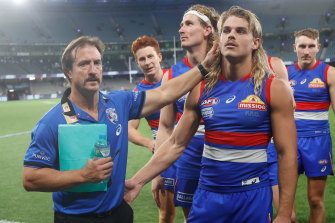 “I’ve spoken to him. He’s put some things in place to make sure that he’s got balance in his life where he mitigates the circumstances he’s exposed to.

“Just imagine the public life of Bailey Smith. He’s just got to continue to be smart and intelligent with what he does away from the club.

“It’s nothing to do with the detection or the sort of social media trial. It’s complicated for him. We just need to help him with that and get some continuity.”

Currently serving a two-match ban for headbutting, Smith was suspended for a further two weeks after admitting to taking illicit drugs last post-season when footage appeared online during the past week. Smith had taken time away from the game for mental health reasons following the 2021 grand final.

“Obviously we know when an individual is involved with something untoward, then it affects everyone. And he knows that,” Beveridge said.

“He’s been really contrite and apologetic, but he’s back training with us. And now we’ve just got to scale up and look to the future to see when he might come back into the team after a month or so.”

Beveridge claimed the saga wasn’t a distraction for the players going into Saturday night’s match, an entertaining win over GWS.

“There was a resolve amongst our players,” Beveridge said.

“I suppose it can affect you. It burns energy more than anything, but credit to our lads, they really galvanised even more.”

Smith will rejoin full training and have extra sessions during his suspension.

“He’s not injured so he’ll train with the main group and then when everyone plays he’ll just do a more significant session just to make sure he gets a game-like training session,” Beveridge said.

“I’m preparing him for a full game of AFL footy when he’s available again.”

The AFL is “looking very closely” at the possible benefits of the last-touch out of bounds rule, potentially following in the footsteps of the SANFL.

AFL general manager of football, Brett Scott, said on Friday that the rule seemed to have a positive impact elsewhere in sport and is therefore an option worth considering for Australian Rules footy. 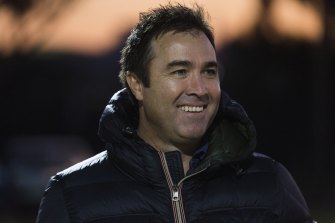 “It seems fairly universal that it’s been a positive change,” Scott said on 7 News.

“It’s fair to say the AFL are looking very closely at what the SANFL are doing with last disposal.”

According to the rule, umpires can award a free kick against the last player to touch the ball before it crosses the boundary line, except in a marking contest.

The discussions have sparked a positive response from several current and former players, including former Crow Bryce Gibbs and Port Adelaide star Kane Cornes, each believing it would be an easy change to implement and adapt to.

“It would be great at AFL level for sure,” Gibbs said on SEN radio on Saturday.

“In the AFL these days they’re paying deliberate out of bounds pretty much 95 per cent of the time anyway, so effectively it just gets the ball back in play quicker.”

After transitioning from the AFL into the SANFL, Gibbs said it only took him about half a dozen games to get used to the rule. Beyond the ease with which he believed it could be introduced, Gibbs said it would improve the pace of the games and make for a more entertaining watch by increasing scoring.

“Teams that score from stoppages and are good around the ball that want stoppages, it probably takes away from their strengths a little bit, but it just gets the ball moving again,” he said.

“I was really against it when it first came into the SANFL, I thought it was a bit Mickey Mouse. But the more I’ve seen it and the more ridiculous the interpretation at AFL level has become, the more I think it has to come in,” Cornes said on SEN radio last year.

“I’m about making it easier for the umpires and we’ve made it more difficult. This just cuts out all of the confusion, last possession out of bounds.”

Although strongly supportive of its introduction, both Cornes and Gibbs acknowledged that new rules always require time and patience to effectively implement, urging the AFL to adopt a careful approach if they decide to embrace the last-touch rule.

“Use the pre-season competition, trial it at clubs when they do their scrimmages [in the] pre-season, have a look at it and get some feedback. Don’t just bring it in Round 1,” Cornes said.

The SANFL introduced the last possession out of bounds rule in 2016, and the AFLW gave it a shot in 2018, although amending it slightly by only applying it between the 50-metre arcs.