Sliding doors at Concord will collide in Townsville as Luciano Leilua goes from the wooden spoon to a grand final qualifier against Isaiah Papali’i, the man slated to take his place at Wests Tigers.

Leilua’s mid-season Tigers exit saw him arrive at the Cowboys six months early to begin his $2.1 million, three-year deal after a concerted pursuit by Todd Payten and several release requests.

The 26-year-old’s Cowboys deal was nutted out after the Tigers held fire on upgrading Leilua’s estimated $425,000 contract while they went after Papali’i.

The Eels back-rower eventually inked the three-year deal worth more than $1.8 million that has since made headlines as Papali’i had second thoughts about his Tigers move.

Papali’i’s management have since told the Tigers to expect their star recruit for pre-season training in January after the World Cup. Leilua, meanwhile, couldn’t be happier with how 2022 has panned out.

“It’s funny how it all works,” he told The Herald. “Ice [Papali’i] is a good man and a guy I like. When he signed with the Tigers I dropped him a line welcoming him to the club. I said, ‘Congrats, and you’re gonna like it at the Tigers when you get here’.

“And then I was off about a week later. I wasn’t worried about him coming into my position or anything like that. I wasn’t fazed but that’s kind of how it all worked out. 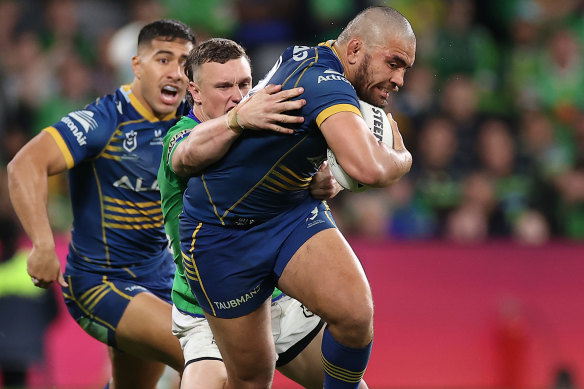 Isaiah Papali’i is Tigers-bound in 2023 after suggestions he could back out of his deal.Credit:Getty

“The Tigers are going to get a guy who’s at the top of his game right now. He can really improve that team. But right now he’s got a job to do for Parramatta and that’s the same as me this weekend for the Cowboys. We’ll see each other on the field and it’ll be a good match-up.”

With his minutes (66 per game) steadily increasing and offensive output (120 running metres and 3.2 tackle busts each match) doing likewise, Payten is thrilled with Leilua’s contribution since arriving in late June.

North Queensland asked the question of an early Tigers release several times earlier in the year, as did Leilua’s management.

After repeated knockbacks, the Tigers eventually opted to save salary cap space and Leilua’s shift north was fast-tracked.

“I went into my manager’s office on a Thursday and he goes, ‘You’re off to North Queensland’,” Leilua said. “‘Yeah, I know. Next year’. ‘Nope, next week. Get packing’.

“I flew in on the Monday and was meeting everyone that day, and now I’m a Cowboy. I’m very fortunate that Toddy was keen [during initial talks last year].

“He just spelled out that he saw my experience and wanted someone that could help our young blokes in the forwards coming through.I loved that. I’m not really a vocal bloke, I’m vocal within the team. So someone valuing that side of my game, that was appealing.

“I was born and bred in Sydney and felt like moving away was a good opportunity. Then looking at the squad the Cowboys had then, I wasn’t wrong, was I?

“Look where they’ve put themselves before I got here, they were top four so I’m just happy to do my job and jumping on for the ride. Now we’re chasing a grand final and can hopefully win it.”