Collingwood vice-captain Steele Sidebottom has told the club he wants to return to the Queensland hub to try and play again in 2020.

Sidebottom's fiancee Alisha Edwards gave birth to baby Matilda one week ago, and coach Nathan Buckley said on Saturday that the pair were "loving" being new parents. 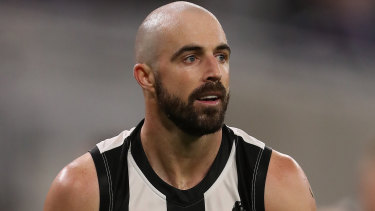 Steele Sidebottom will try to return to the Pies hub. Credit:Getty Images

"He just has remarkable self-discipline and a capacity to stay on task.

"That’s why he has been a great player and a great leader."

Meanwhile, Collingwood defender Tom Langdon, who has not played since May 2019 because of a chronic knee injury, has recently faced a setback, one that is again forcing him to face his football mortality, Buckley said.

Langdon had finally made enough progress to play scratch matches.

"His knee has been problematic," Buckley said, adding that Langdon pulled out of a recent scratch match against the Brisbane Lions after 10 minutes because his knee was too sore.

"He hasn’t done a lot in the last week-and-a-half.

"It’s a challenging circumstance for Tom to be in. He is a well-rounded young man, he is more than a footballer.

"It’s been over 18 months now. There’s some decisions to be made there by Tom first and foremost. And then we need to work with him to see what the next steps are."

Depending on other results, the Pies could avoid a trip to Perth to play West Coast in a final should they beat ladder leaders Port Adelaide.

This was not a consideration or motivating factor for the Pies, Buckley said.

"I think we’re in really good shape. I have been really consistent with my utterings in the last month or so.

"I think we have been building … [the Brisbane loss] showed that we’re not far off it.

"We believe we have been able to establish more consistency in our game style … is improving. And out contest and stoppage work has been fairly consistent through the year.

"We’re looking forward to Monday to test that and impose that against a really good team."