North Melbourne and the Western Bulldogs have retained the standalone Good Friday game for the 2022 season.

North will host the Bulldogs on Good Friday on April 15 at Marvel Stadium, in a game that the Roos have sought to build into a blockbuster. The match will again be played in mid or late afternoon. 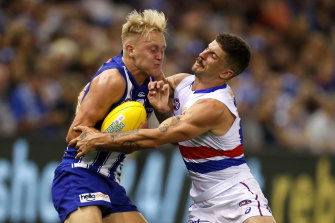 North Melbourne and the Bulldogs will play each other on Good Friday in 2022.Credit:AFL Photos

It will be the third consecutive time North have hosted the Bulldogs on Good Friday, the Dogs having played in the inaugural match on that Easter public holiday in 2016 and again in 2017. 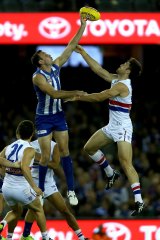 St Kilda lost the fixture after a disappointing performance and attendance of 33,966.

But North were much more competitive in their second encounter with the Dogs this year and are buoyant after a post-season that saw them utilise the No.1 draft pick on explosive midfielder/forward Jason Horne-Francis and acquire Callum Coleman-Jones as a forward/ruck from the Tigers.

North chief executive Ben Amarfio said the Roos hoped that the crowd for Good Friday would exceed 30,000, bearing in mind some of the issues fans had faced with COVID-19, including transport and other impediments to attending games.

“We’re hopeful the Victorian and North Melbourne members and also Bulldogs fans show up in force,” Amarfio, who was “very pleased” the Roos had retained the game, said.

He said the club would work hard with the AFL on marketing the Good Friday game.

The match acts as a lead-in and additional fundraiser for the Royal Children’s Hospital Good Friday Appeal.

The AFL had long resisted playing on what had been regarded as a football-free holiday with religious significance to Christians.

The AFL 2022 fixture will be released late this week. The first round has already been scheduled, with Melbourne and the Bulldogs to play a grand final rematch on Wednesday, March 16, Richmond and Carlton meeting in their now customary Thursday night clash and Collingwood and St Kilda playing on the Friday. Essendon and Geelong will face off on Saturday evening, with Hawthorn and North Melbourne to play each other on Sunday.