The Cronulla Sharks will need to pull off a win against the Raiders this weekend, without their best player, to avoid going down as the worst finals team in NRL history.

No team in the NRL era, which dates back to 1998, has ever qualified for the finals without beating one of the teams in the top eight throughout the season. A loss to the Raiders on Saturday, without the injured Shaun Johnson, will see the Sharks create history for all the wrong reasons. 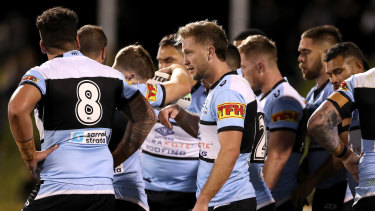 The Sharks could be crowned the worst finals team in NRL history after this weekend’s game against the Raiders.Credit:Getty Images

The Sharks' record against the top-eight teams is far from impressive, notching an aggregate losing margin of 212-106 in the seven games played against the finals-bound sides. That's an alarming average of 30.2 points per game conceded.

Cronulla have beaten the Titans, Cowboys and Warriors twice this season, also notching wins against the Tigers, Bulldogs, Sea Eagles, Dragons and Broncos in their push for a finals berth. All teams that will play their last game of the year this weekend.

While no team in the NRL era has achieved what Cronulla are on the verge of doing, it has happened once before in a top-eight system. North Sydney’s 11 wins in the 20-team 1995 competition, which saw the Bears scrape into the finals in eighth spot, all came against teams that didn’t feature in the play-offs. 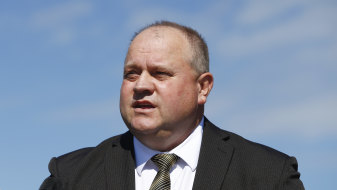 O’Neill and the Panthers football club board were last week re-elected unopposed until 2022. If Cleary and the Panthers had failed to fire in 2020, the infamous meeting at a South Penrith cafe at which the coach was convince to return to the club would have gone down as one of the game’s greatest blunders.

Even more so when you consider Phil Gould had a handshake agreement with Wayne Bennett to join the club, only for O’Neill and the board to go with Cleary.

Turns out it was a stroke of genius. The Panthers have built a foundation for years of sustained success with a bunch of footballers who are more friends then teammates, and the coach is an integral part of it.

"One of the reasons I made the decision to bring Ivan Cleary back is that I knew he had a connection with the younger guys," O’Neill said. "I was more looking at the long term sustainability of our club rather than a short term hit. That’s why we went with Ivan." 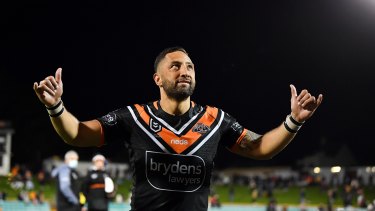 Benji determined to extend his career

Don’t expect Benji Marshall to announce his retirement leading into his final game for the Wests Tigers this weekend.

Marshall deserves a fitting send-off, however he won’t call it quits on his NRL career despite little appetite from rival clubs for next season. Marshall is holding out hope of a club offering him a deal in the off-season once the salary cap is determined and a few pending player transfers open doors.

With Canterbury on the brink of a civil war, rumours have been flying around thick and fast in recent weeks. Some are laughable, others have merit.

This column was told that former chairman Ray Dib had taken out management liability insurance to protect the club prior to re-signing Des Hasler midway through 2017. That much is true – the Bulldogs did take out an insurance policy, such was their hesitance about extending Hasler.

There was a suggestion that, after Dib was deposed at the ballot box in 2018, new chair Lynne Anderson chose to ignore the claim and settled with Hasler with cash from the club’s $3m savings in a sign of respect to the former coach.

We checked it out with the club. Such spending would be scarcely believable given how desperate the club is for money and sponsors. The Bulldogs insist they did pursue the claim but were knocked back twice by a local insurance firm.

It wasn’t until they lodged the claim with a European company did they receive a payout. It’s believed to be worth about 25 per cent of the sum Hasler and the Bulldogs settled for. The settlement figure varies between $600,000 to $1 million, depending on who you ask.

D-day is looming for boom Panthers rookie Charlie Staines as he weighs up an opportunity to link with the Bulldogs.

The fullback is on contract for another year and was presented an extension by the Panthers some time ago, but the club gave him permission to test his value on the market to see if their offer reflected his worth.

Canterbury have apparently offered far more than what the Panthers are willing to offer, but Penrith aren’t convinced that’s the case. Staines’ manager will likely meet with the club this week to continue discussions.