The team song had barely been sung when Parramatta’s man of the match Dylan Brown urged long-suffering fans to dare to dream.

Brown was sensational in the 40-4 semi-final hammering of Canberra on Friday night, which booked the Eels their first preliminary final since 2009.

By avoiding another week two finals exit, the Eels took the pressure off coach Brad Arthur while also giving supporters, who have been waiting 36 years for a premiership, renewed hope.

Brown also dismissed reports of nepotism at the club, claiming the addition of the coach’s son, Jake Arthur, on the interchange had been highly valuable over the past fortnight.

Arthur snr was clearly upset by a newspaper report about a leaked internal review that suggested nepotism and other forms of favouritism existed at the Eels.

“If someone has an agenda, they’re not going to break us,” he said after the game. “There’s some personal interest [out there]. Whoever has the agenda, you won’t break this group. We’ve worked too hard. We’ve dealt with plenty in the past. We didn’t even address it or talk about it.” 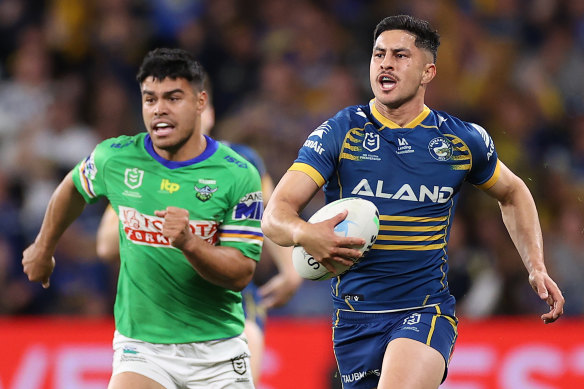 Dylan Brown was superb for the Eels against Canberra on Friday.Credit:Getty

Brown backed his coach and his team’s resilience, saying: “We didn’t discuss it, we ignored it, and the outside noise doesn’t mean a thing.

“It [the inclusion of Jake Arthur on the bench] was perfect for us just then. Mitch [Moses] went down, Jake slotted straight in and there were no dramas. If Jake wasn’t there, people would have played out of position and done other things. We were very lucky Jake was on the bench in this circumstance. 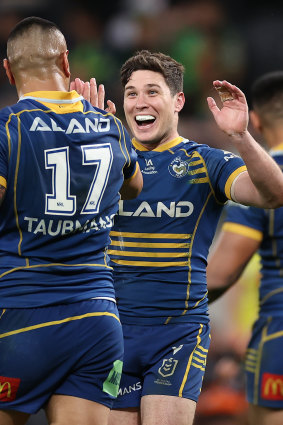 “It comes from people who are sad with their own dramas, and who worry about themselves.

“I didn’t know about it until my mum told me. She reads all the news. I didn’t know what it meant until [I looked it up]. It’s not the case at our club.”

Brown said the confidence within the group was reason enough Parramatta could go all the way and end the longest title drought in the game.

“Of course. Why not?” was Brown’s response when The Sun-Herald asked about Eels fans daring to dream of premiership glory.

“It’s an attitude thing. We’ve come into the finals confident and playing the way we want to play.

“Last weekend [a 27-8 qualifying final loss to Penrith] didn’t reflect that, but we did tonight [Friday]. There’s a bit of confidence we will get out of that.

“I was missing last week; a lot of us were. For us to get more involved and play the way we normally do, like we did just then, I’m happy with that.

“Me, Mitch and ‘Gutho’ [Clint Gutherson] were linking, and we didn’t do that last week. If you look at the tries tonight, most of them came from one of us.”

Moses survived a couple of brutal shots in defence in the second half from Jack Wighton and said when he stayed down after the first hit, it was a case of him being winded rather than trying to milk a penalty. The halfback added he could not recall being so nervous before a game.

There was never any thought of keeping Moses off the field after a head injury assessment, even though he came into the game on the back of a concussion.

The only player who might miss the private charter flight to Townsville is Tom Opacic, who suffered a hamstring injury. His potential absence could see Marata Niukore shifted to the centres, or Waqa Blake moved infield and Bailey Simonsson brought on to the wing.

Stream the NRL premiership 2022 live and free on 9Now.