Home » Rugby suffers from financial struggles in New Zealand, so how would a new NRL team survive?

I read with interest this week reports the NRL is considering setting up a second team in New Zealand, and particularly the suggestion there is a huge opportunity there, given the financial state of rugby in the country.

The idea is supposedly to increase junior participation and create a rivalry with the New Zealand Warriors that will increase interest in my home land. 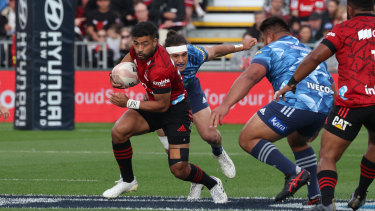 The Crusaders are hugely successful on the field, but all of New Zealand’s Super Rugby franchises struggle financially. Could the NRL really break that trend?Credit:Getty

There was also a chap named Gerard Stokes, who did such a great job helping English cricket by raising a son named Ben.

It’s highly debatable whether another NRL franchise anywhere in New Zealand would actually lead to more people playing the sport, so could there be a financial incentive?

Again, that is difficult to imagine. Given the great majority of NRL teams are propped up by millions of dollars a year by the NRL, I just can’t see the value in expanding into a market that will not provide any significant new revenue.

I’ve been fortunate recently to have had some dealings with a number of NRL executives, who are all intent on the overall financial health of their sport and product, not just their own clubs.

New Zealand Super Rugby franchises have been struggling to pull in profits in recent years, hence it’s no surprise NZ Rugby is exploring options to inject much-needed capital into the sport.

I just don’t think the financials will stack up for the NRL. We’re a small country in New Zealand and there is a team alredy servicing our biggest market in Auckland.

Why would you risk splitting the support?

Realistically, what will it add to the NRL in terms of talent? The opportunities already exist for rugby league to bring players across from rugby, right from school first XV rugby.

Domestic corporates are unlikely to provide much support and, equally, television rights don’t have a massive upside when the population is 4 million and the majority have access to rugby league anyway.

In terms of an expanded NRL, I would have thought it better to concentrate on the next Queensland team and further clubs throughout Australia, maybe in Perth or Adelaide.

Meanwhile, offshore expansion would make more sense into Asia. I’m aware that supporters and local players would be hard to find but just look at how much rugby has boomed in Japan in the past decade. The Rugby World Cup in 2019 in Japan was an incredible event, on so many levels.

The NRL keeps discussing the potential of breaking into the USA, but if rugby in Asia is a blueprint, perhaps that region is not the worst idea. The logistics would certainly be much easier given the similar time zones.

Clearly a team there would not be stacked with locals but, given the size of the economies, even a small slice of the pie would far outweigh the financial contribution of a new NRL side in Christchurch or Wellington.

I noticed New Zealand Rugby League boss Greg Peters spoke cautiously this week about the possibility of a second team. Keep in mind he is a former SANZAAR chief executive, so has an excellent understanding of the challenges Kiwi Super Rugby teams face to stay afloat.

One thing that does annoy me – and I’m not necessarily saying it’s occurring here – is the notion of the code war. The global platform for rugby is incredibly strong and there is no need for the two codes to clash just for the sake of it.

I’ve written before about my affection for rugby league, despite carving out a career for the All Blacks. What’s wrong with liking both?

In Australia the “class divide” hinders that cross-over much more than in other countries.

From a competition perspective, I have always believed that having just one team from a country in another’s domestic competition is less than ideal. In saying that, the Breakers did well for a period in the NBL, but it is unusual for the official, and the unofficial, “national” side to do well.

It’s hard to get buy-in from the entire support base when there’s already a national team playing that role. So having a second Kiwi NRL team from that angle seems to me to be a positive.

To put it simply, if Super Rugby franchises are finding the going tough in New Zealand, why would a new NRL team fare any better?