Roosters hooker Sam Verrills will head to the judiciary in a bid to play in the semi-final against Manly on Friday.

The Roosters entered an early guilty plea on a grade two careless high tackle charge from the clash against the Titans on Saturday but will dispute the grading at NRL headquarters on Tuesday in a bid to have the penalty for Verrills reduced to a fine.

If successful, Verrills will receive a fine of $1150. If unsuccessful, he will be suspended for two weeks.

Teammate Jared Waerea-Hargreaves, who has successfully fought a number of charges at the judiciary in recent years, said Verrills’ clean history would assist in his bid for a downgrade.

Waerea-Hargreaves said he spoke to the 22-year-old about his judiciary appearance on Monday morning.

“It’s his first time going to judiciary. Being a young guy and a bit of a cleanskin, he is pretty nervous,” he said.

“You can clearly see by the footage there was no intent there, so I feel like he’s got a good case.”

Skipper James Tedesco also defended the hooker and said Verrills had fallen into the tackle.

“It could be a big loss for us if he does miss, because he’s been our No.9 playing 80 minutes for most of the year now. He’s just getting better and better every week,” he said. 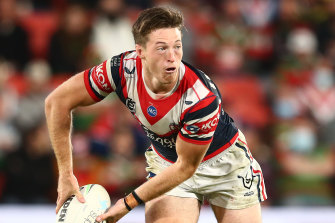 Sam Verrills faces suspension in the second week of the finals.Credit:Getty

Meanwhile, NRL head of football Graham Annesley backed the referees on Monday on a controversial penalty try scored by the Eels in their win over Newcastle.

The Eels were awarded a penalty try in the 77th minute after the bunker ruled Will Penisini was tackled without the ball.

But there was uncertainty around whether Eels captain Clint Gutherson had knocked the ball in the grubber kick chased by Penisini.

Annesley said that, under NRL rules, even if the ball did hit the ground before the kick the grubber was still valid.

The rule states: “A drop-kick is a kick whereby the ball is dropped from the grounds (or hand) and is kicked immediately it rebounds from the ground”.

“You can see he is definitely moving his foot towards the ball. He’s certainly attempting to kick it. I don’t think there is any suggestion the ball accidentally hit his foot,” Annesley said.

Frizell returned to the field despite looking unsteady after hitting the hip of Reagan Campbell-Gillard in the early stages of the game.

“I’m not going to suggest to you at the moment that anything untoward has happened, but we need to get more information from the people who actually conducted the examination,” he said.

“We will follow it through and then we will make any decisions that need to be made.”