Rugby league Immortal Mal Meninga is going to be given a take-it-or-leave-it offer from the NRL to continue as Kangaroos coach as part of a deconstructed position more in line with the times in which we live.

Meetings will take place with Meninga in coming weeks where the brutal reality will be laid bare. That reality will include a massive pay cut. 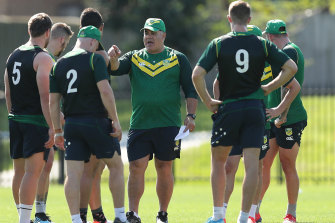 As revealed in this column a few weeks ago, there has been growing angst about Meninga’s pay packet as full-time Kangaroos coach when, for the past two years – through no fault of Meninga’s – he has had little, if anything, to do. Australia’s last international was against Tonga on November 2, 2019. As one club official said to me, “Mal must be a fan of Dire Straits”, in reference to their song Money for Nothing.

Under the reign of former NRL chief executive Todd Greenberg, sources with knowledge of the situation suggest Meninga’s first deal was worth well in excess of $500,000 a year. Now, he is believed to be earning $450,000.

What has upset people in the game is that while NRL headquarters went through a massive restructure and many jobs were cut, there was no change to Meninga’s deal, despite the Kangaroos not playing matches due to COVID-19.

The belief of many at the NRL is that the national coaching job is no longer a full-time position. The maximum the national coach can now earn will be $200,000, but that figure can only be reached if performance benchmarks are hit. That’s something the Kangaroo coach should be able to do, given Australia’s dominance in the game.

It did not sit well with NRL clubs that a national coach was earning about $500,000 a year when there was no international football being played. Those days are over. This is not an attack on Meninga by me or the game’s hierarchy; it’s simply a matter of correcting the mistakes of the previous administration.

The base wage for the Kangaroos coach is likely to be about $125,000. Not bad for a few weeks’ work a year. If Meninga doesn’t want the gig, there are plenty who will. Wayne Bennett has done the job before and could easily do it again. Not that he is putting his hand up right now. Bennett is particularly close with ARL Commission chairman Peter V’landys.

Give us a break

The suggestion that clubs want the NRL to pay for them to stay in Queensland after the season ends was raised by NRL boss Andrew Abdo at a meeting of chief executives on Friday. It was reported during the week that one club boss had questioned why NRL teams were to be sent straight back to COVID-ravaged Sydney and Melbourne as soon as their seasons were finished.

On Friday, Abdo asked for someone to raise it officially or to put it forward as a request but not one of the 16 CEOs on the Zoom meeting said a word.

The only thing the clubs should be discussing is the code’s vaccination policy and perhaps rolling that out now, while the players are together. A first jab would be a great start.

Considerable backlash against the idea that players and staff would get a holiday in Queensland after the season, paid for by the NRL, has come from the game’s longest serving chairman, Sydney Roosters’ Nick Politis.

“It makes the clubs look out of touch and selfish,” he said. “I don’t believe any club would raise this. It makes no sense. The NRL is already spending $15 million a month on keeping the competition going. No one is going to ask for more time in Queensland. We need to keep costs under control and we need to get our players back in their own beds and then back into pre-season [training]. It’s irresponsible to present that kind of story and it damages every club.” 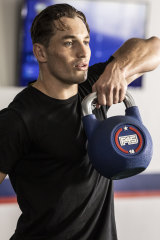 We know Cameron Murray and Ryan Papenhuyzen are superstars of the NRL – and here is further proof. F45, the Australian fitness group, has singled out the pair to be Australian ambassadors and their image is part of the company’s global push.

The company is being spruiked around the world by the likes of Hollywood star Mark Wahlberg and football great David Beckham – and now two of the NRL’s brightest stars.

F45’s Australian founder and chief executive Adam Gilchrist (not the cricketing great) said: “NRL is a big part of Australian culture and we wanted a relationship with the sport given its alignment to our brand DNA; community, fitness and camaraderie.”

Gilchrist pulled in about $500 million overnight last month when the company was floated on the New York Stock Exchange.

The NRL will target western Sydney with special versions of its vaccination commercial, featuring the likes of Panthers superstar Nathan Cleary pushing the cause.

Peter V’landys was the driving force behind making NRL players vaccination poster boys. He gave specifics to this column long before the commercial was shot. In fact, it was only finalised on Friday. With the players in hubs in Queensland and the NRL’s content producers in Sydney, it was not a simple task.

A lot of players are hesitant about spruiking the benefits of vaccination. They are waiting for the NRL to announce its vaccination plan. One player told me he was sick of waiting so he just turned up at his local pharmacy and got an AstraZeneca shot.

It is no surprise that Connor Watson has decided to return to the Roosters. They don’t miss many players they want. But there is no split between Knights coach Adam O’Brien and Watson.

The issue is that Watson was offered $50,000 less than he is now on to stay in Newcastle. He was then given two deadlines last Friday – 2pm and 6pm – to re-sign. Before the deadlines came a heart-to-heart with Roosters coach Trent Robinson, then chairman Nick Politis called to say the club wanted Watson back. That’s why he left.

Watson wouldn’t have had the first chat with Robinson if the terms he was offered in Newcastle were the same as his present wages.

The bigger problem at the Knights is the large number of players, coaches and staff aligned with the company of banned manager Isaac Moses. Watson is not one of the company’s clients.

Luke Brooks’ name keeps being linked with rival clubs, even though the Tigers say they are not pushing him out the door. Sydney-based teams have told me his services have been offered to them by his agent.

Jack de Belin was not just considered as captain for the Dragons in Sunday’s clash with the Roosters, he was actually named as skipper on the original team sheet submitted to the NRL on Tuesday. The NRL will not confirm this publicly, but sources with knowledge of the situation have confirmed it.

To be entirely accurate, de Belin was named as co-captain with Jack Bird. It’s mind-blowing that the Dragons would even consider the move. The NRL is becoming increasingly concerned by some of the thinking coming out of the Dragons’ football department, particularly the tone-deaf attitude of coach Anthony Griffin. 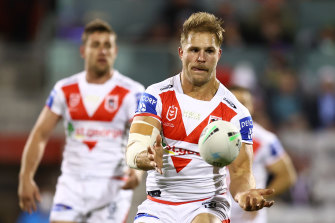 Jack de Belin was named as Dragons skipper on the original team sheet submitted to the NRL on Tuesday.Credit:Getty

The very thought that de Belin could be made skipper of the club shows a significant inability to gauge the mood of the public. The sexual assault charges against de Belin were dropped after two juries could not reach a verdict and everyone deserves a second chance, but he showed he has a long way to go to become the public face of the club when he was found hiding in a bedroom at Paul Vaughan’s house during the infamous Dragons barbecue.

We also highlighted Griffin’s personal views, as expressed on his social media accounts, in this column last year, although he later said his daughter had been running his accounts.

Griffin made the great choice to appoint Ben Hunt club captain for this season and name Tariq Sims skipper for the match against the Roosters on Sunday in Hunt’s absence. He needs the Dragons to finish this season and start 2022 well because their record of four wins from his past 16 games has been lost in the barbecue-gate fallout.

Griffin has signed plenty of tough guys and the plan to bash and barge their way up the ladder will need to succeed quickly as Griffin has a year left on his deal.

In the 1980s, Gary Bridge was a household name as a dashing utility back with Balmain and Easts. Only those who know the sport well would be aware that his daughter, Krystylea Bridge, lost her battle with a rare form of cancer in 2013 aged 27. The rugby league community has not forgotten her.

NSW coach Kylie Hilder had no hesitation offering the last State of Origin jersey she wore to help raise funds before the annual Krystylea Bridge Cup game between Taree and Wingham.

“I used to work for Gary and [his wife] Tanya at their sports store in Taree,” she said. “It was my absolute pleasure to do something for the Bridges.”

The proceeds from the Krystylea Bridge Cup auction go straight the Manning Valley Branch of Can Assist, which supports people battling cancer.