Adelaide’s most prolific goalkicker Taylor Walker led the Crows to a stunning one-point upset of the Western Bulldogs in a tense defensive battle in Ballarat on Saturday.

The rejuvenated veteran continued his outstanding form since returning from his ban for making a racist comment by kicking two critical final quarter goals, including the match-winner.

The victory validated a tremendous defensive effort from the Crows, which blunted the potency of the Bulldogs and proved marginally stronger in the dour struggle at Mars Stadium. 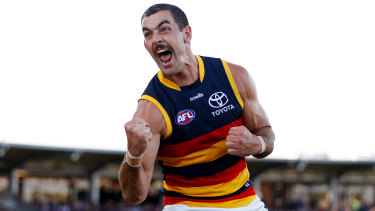 Taylor Walker was the man of the moment for Adelaide.Credit:AFL Photos

If football is ever played on Mars, it is hoped the goalkicking would be more accurate than this, with Adelaide, in particular, almost booting away their triumph before Walker came to the fore.

The Crows have now split the ledger after six rounds, but a loss at their second home raises serious questions for the Western Bulldogs, who are yet to find any consistency this season.

Beaten to the footy early on a beautiful day in Ballarat, the Bulldogs were haphazard initially when kicking into their forward line, which blunted their scoring hopes in the opening term.

This allowed Crows Jordan Dawson – who took a spectacular grab over Lachlan McNeil midway through the first term – Tom Doedee, and Billy Frampton to intercept the ball frequently in defence.

But as the Bulldogs began to wrest back control through the midfield, their patience and decision-making improved, which enabled them to take a seven-point lead into quarter-time.

It is no coincidence two of the Bulldogs’ three first term goals stemmed from precise passes from Jackson Macrae to Jamarra Ugle-Hagan, and Marcus Bontempelli to Aaron Naughton.

Having spent Friday night in Daylesford, the Crows were on top initially after kicking the first two goals of the match. 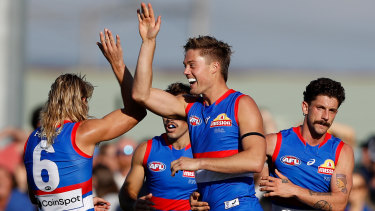 A DEFENSIVE BATTLE OF BALLARAT

The Bulldogs looked to have found their rhythm in the latter stages of the first term, but it proved a mirage as the match became a real struggle after the opening break. 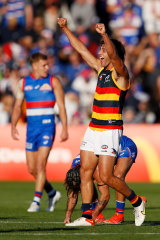 The blue sky suggested a perfect day for footy, but the swaying trees in the background hinted the conditions were trickier than it appeared at ground level.

The sheer number of Crows at the majority of contests stifled the Bulldogs’ run. But nor were they able to score freely, with the Bulldogs leaving their additional man behind play.

For just the second time this season, the Bulldogs were held goalless in a term in what was the lowest-scoring quarter played in the competition to date this season.

A goalless quarter proved costly for them against Melbourne in the opening round, with the Demons getting on top in the premiership quarter, and it hurt them again on Saturday.

Walker, who was lively in the opening term when Adelaide had control, booted the only goal of the second quarter when cleverly using his body to allow the ball to fall in his favour.

Walker’s 500th goal came at a critical time, with the veteran spearhead kicking the opening major of the final term to establish a buffer for the Crows.

But his 501st goal, which came with just over two minutes remaining to put the Crows seven points in front, was even more important.

After Adam Treloar kicked his second with a superb snap, Josh Schache and Josh Dunkley regained the lead for the Bulldogs with successive goals within a minute midway through the term.

Adelaide’s inaccuracy continued. Walker nailed McHenry with a pass, only for him to miss from straight in front. But Walker had another chance soon after and, from near the boundary line, kicked accurately when so many of his teammates were unable to do so.

Crows Ben Keays, Josh Rachele and Ned McHenry all missed crucial shots, before Walker proved himself the matchwinner when weaving a superb shot from the boundary line.

Marcus Bontempelli snared another for the Bulldogs in the final seconds to close the margin to one point, but it was too late to make a difference.