Queensland Reds have clocked up their biggest Super Rugby total, scoring 10 tries to thump Japan's Sunwolves in their first game at home this season.

The Reds had shown glimpses of magic in all three road losses to start the season but it all came together at Suncorp Stadium on Saturday in a 64-5 bonus point win that was also their biggest Super Rugby victory. 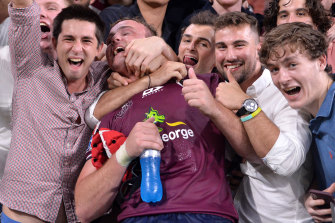 The masterclass eclipsed their previous best 53-3 defeat of the Melbourne Rebels in 2011 and shot the Reds to second in the Australian conference behind the Brumbies.

James O'Connor was in complete control at No.10 while Jock Campbell shone at fullback and Hunter Paisami impressed at outside-centre, having replaced injured Wallabies No.13 Jordan Petaia last week.

While the back line hummed, the scrum was also dominant as the Reds scored 50 unanswered points in just 49 minutes.

Campbell was a threat all night in broken play, skimming through the Sunwolves defence to set up reserve prop Josh Nasser for the record-breaking try. 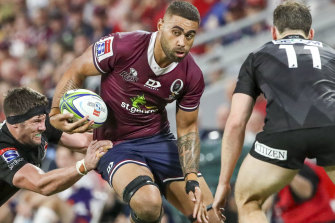 Lukhan Salakaia makes another charge for the Reds against the Sunwolves.Credit:AAP

The Reds led in all three games of a tough season-opening tour against the Brumbies, South Africa's Lions and Argentina's Jaguares.

But they found different ways to lose in a exasperating opening month that reaped just two bonus points.

Those frustrations were vented against the soon-to-be extinct Tokyo-based franchise.

Captain Liam Wright opened the floodgates when he snuck down the short side from a lineout in the fifth minute.

O'Connor had the side's sixth 40 minutes later, backing up another Henry Speight break for a 36-0 half-time lead.

Halfback Tate McDermott had a try in his third successive game when he was first to a loose Sunwolves pass and grubbered to himself for an emphatic put-down.

Hamish Stewart then got in on the action, delighting the 11,798 fans who hadn't seen a display of dominance from their side since their premiership charge nine years ago.

Isaac Lucas then made the most of his late-game cameo, darting through the line for a try to complete the rout.

The Reds now host the Sharks next Saturday night.