The Melbourne Rebels will be forced to have some tough conversations after being unable to slow the speedy Sharks on Saturday.

Springboks playmakers Curwin Bosch and Makazole Mapimpi proved too much to handle as the Sharks scored a 36-24 win in sunny conditions in Ballarat in the first Super Rugby match played in a regional Australian town. 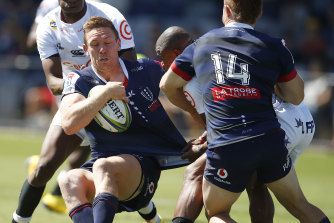 Dane Haylett-Petty is tackled by the Sharks.Credit:Getty Images

Rebels coach Dave Wessels said his side had endured a disrupted week due to injury and illness as they struggled to play 15 on 15 at training.

Only reserve half-backs Frank Lomani and Theo Strang were fit to fill the backline spots on their bench after winger Campbell Magnay hurt his hamstring on Friday joining Reece Hodge, Matt To'omua, Ruan Smith and Luke Jones on the sidelines.

But after watching the Sharks run for 445 metres to 257m from the Rebels, Wessels said he and his players needed to have a tough conversation.

The Rebels closed to within 15-10 of the Sharks close to half-time only to concede a try on the siren with Bosch throwing a pass which looked forward but was called fair by the South African referee pushing the lead to 22-10 at the break. 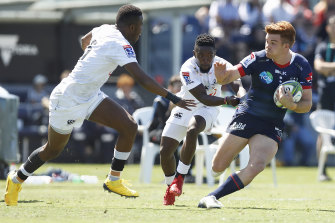 Andrew Kellaway of the Rebels fends off a rival in Ballarat.Credit:Getty Images

"We lost so many big moments in the game," Wessels said.

"We can talk about being unlucky but that doesn't help us. We didn't control the things we can control in the big moments and therefore we lost the game.

"To be a championship team we must have a proper discussion about why did we lose the moments that mattered."

Sharks hooker Kerron Van Vuuren was yellow-carded for a tip-tackle on Koroibete early in the second half and soon after winger Madosh Tambwe joined him on the sidelines for a professional foul.

While Naisarani's try came during that time, the Rebels' attacks were cut short by stalling tactics from the Sharks after a scrum was called close to Melbourne's try line.

"Credit to the Sharks, they had those yellow cards and took nearly 10 minutes to set that scrum, it's very smart but it makes it hard to attack when we are all standing around," Wessels said.

But he wouldn't elaborate when asked if referees needed to take action against such tactics.

"If it's clear then you must write that, I'll get in trouble if I say what I think," Wessels said.

Rebels captain Dane Haylett-Petty said his side needed to handle their opportunities better.

"It felt like it was an even tussle and 90 per cent of the game you would struggle to know who was winning," Haylett-Petty said.

"We lost some key moments and you pay for it. We missed our opportunities and they took some of theirs and won."

The Rebels face the Highlanders in Dunedin on Friday at 5pm.