The former NSW Waratahs' flyer, who joined the Rebels this season after an overseas playing stint, scored a long-distance try in each half of Friday's absorbing contest. 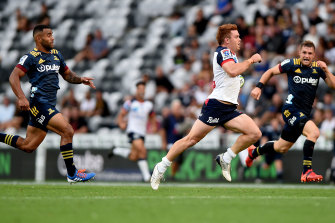 Andrew Kellaway races away to score one of his two tries for the Rebels against the Highlanders.Credit:AAP

In the 21st minute, Kellaway pounced on a Highlanders error and burnt rival winger Jona Nerike in an 80m effort, before intercepting an Aaron Smith pass in the 52nd minute to grab his second.

The 24-year-old played 25 matches over three seasons for the Waratahs but failed to really make his mark on the competition.

The Rebels made a flying start, scoring at a point a minute to lead 21-0 midway through the first half, with centre Billy Meakes and rampaging hooker Anaru Rangi both touching down.

With their big men doing plenty of damage, they dominated the set piece and showed plenty of energy in defence.

But the Highlanders showed courage to claw their way back, particularly after losing skipper James Lentjes to a badly broken ankle which stopped play for seven minutes.

The home side scored in the final minute of the first half through All Blacks halfback Aaron Smith to trail only 21-14, which was a stunning feat given the Highlanders had only had 37 per cent of possession.

The Highlanders lost Nareki for the final two minutes for the same offence as Gregory – taking out Dane Haylett-Petty as he went for a high ball.

The home side had one final lineout after fulltime to try to score the match- winner but the Rebels held on for a well-deserved result.

The loss was the first for the Highlanders at home to an Australian team since a 2014 defeat by the Western Force.