Home » Rugby » Pump the brakes: The subtle shift that has Parra flying into finals

Saving the NRL’s fittest man from himself shapes as a key pillar of Parramatta’s bid to ride their finals momentum into Friday’s western Sydney stoush against Penrith.

Captain Clint Gutherson’s status as rugby league’s road runner – often clocking around 10 kilometres a game, according to Telstra Tracker GPS data – has been a feature for much of Brad Arthur’s tenure at the Eels.

Penrith counterpart Dylan Edwards is one of few who can genuinely claim to match Gutherson’s regular output.

While the Eels have often started a season on fire before burning out by finals time, a shift in training focus has them peaking at the right end of their campaign this year.

Impressive wins over Canterbury, Brisbane and Melbourne in recent weeks secured an all-important top four spot and a chance to nab a third victory of the season over minor premiers Penrith.

“This is the best we’ve finished in three or four years and we’ve put together our best three games of footy in a long time,” Gutherson told The Herald on Monday.

“Last year we limped in [to the finals], we won two of seven and still played pretty well in the finals still, so we have to take a lot of confidence with us.

“You need a bit of luck, and we’re injury-free and that’s probably somewhere there has been a bit of focus on. There’s probably been a little bit more focus on each individual game. It’s been more week-to-week, not say looking at something further down the track in three to four weeks’ time.”

Gutherson is well established as Parramatta’s leader on the training track, with Dylan Brown famously fainting from exhaustion after keeping up with his skipper across three two-kilometre time trials in 2018.

But, wary of the Eels’ late-season fade-outs, Parramatta performance staff have kept a closer watch on Gutherson’s odometer than ever before.

“I’ve pulled back my training a little bit this year too and tried to look after my body a bit more,” he said.

“I’m probably trying to hold back. Previously I’ve gotten excited and tried to do more and more, and that’s the hard thing – the staff do hold me accountable with that, making sure I don’t do too much.

“They’ve looked after me and I’m in the best shape I’ve been in a long time, physically and mentally.”

Parramatta have lived with the millstone of a premiership drought that now stands at 36 years as well as annual speculation around Arthur’s coaching future given their finals struggles.

The Eels have never progressed past week two of the finals on Arthur’s watch but pushed eventual premiers Penrith all the way in an 8-6 thriller last year. 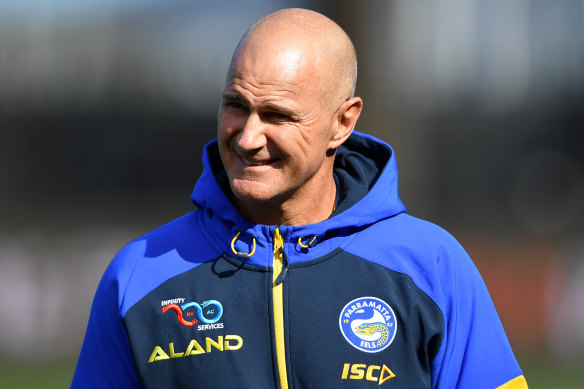 Brad Arthur’s tenure is questioned on an annual basis thanks to the Eels finals struggles.Credit:NRL Photos

Parramatta’s ability to raise their game against the big sides has been their biggest asset in recent seasons, with Champion Data analysis showing their 54.5 percent win rate against top-eight teams this season is second only to the Panthers.

A no-holds-barred honesty session after last month’s 26-0 loss to the Rabbitohs galvanised the Eels, who then won three straight games to end the season. The club must confront the looming departures of Reed Mahoney, Isaiah Papalii, Marata Niukore and Oregon Kaufusi as they head into the finals.

“We want to look back on this year and say we didn’t leave anything to chance,” Gutherson said.

“We haven’t spoken about our star players leaving that much. It’s disappointing but everyone who is moving on, they’ve all said they’re all in this year. They have done that so we need to repay them and have a good last month of footy with them.”