Collingwood are nervously awaiting the results of scans that will determine the extent of the hamstring injury that forced key defender Jeremy Howe out of Friday night’s match against West Coast before half-time.

The 30-year-old had scans in Melbourne on Saturday morning with the Magpies uncertain of how long Howe may miss as a result of the injury. 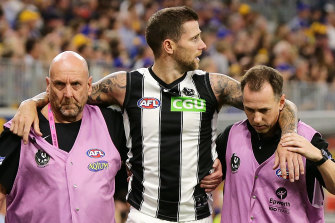 Jordan De Goey has already been ruled out of next Sunday’s Anzac Day clash against Essendon after he suffered concussion and a broken nose when he collided head first into Eagles’ midfielder Tim Kelly’s hip in the first quarter.

The pair may also find themselves subject to questions from the club and the AFL after they were seen accessing their phones from the rooms midway through the game after they had been treated for their injuries.

The rules stipulate that only 10 people per club have permission to access their mobile phones in the rooms until after the match with the AFL certain to issue a please explain to the club after their football operations meeting on Monday.

Due to integrity concerns all players are expected to hand over their phones to the club’s compliance officer when they enter the rooms before the match and the phones are placed in a secure box.

However De Goey was seen on the permanent camera in the rooms grabbing two phones and giving one to Howe.

The Magpies are also yet to determine the extent of the shoulder injury to Brody Mihocek who finished the game on the sidelines with an icepack applied to his shoulder.

The Eagles were confident post game that Tom Cole and Josh Rotham had not suffered concussion when they clashed heads late in the win over the Magpies. Both suffered cuts to the face and were assisted from the ground.