Port Adelaide made Geelong look old, slow and probably too banged up for an assault on this year’s flag with a convincing 43-point qualifying final victory on Friday night.

For the second year in succession, the Power’s expeditious path to the preliminary final came at the Cats’ expense at Adelaide Oval.

But unlike last season when Port toiled their way to the finish line against an inaccurate but evenly-matched opponent, Geelong were seldom in this contest. 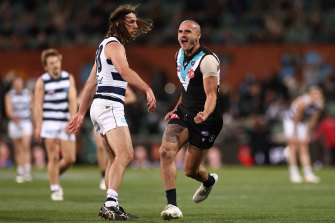 As was the case in last year’s corresponding fixture, Geelong self-sabotaged through errant goal-kicking – but this time it wasn’t their only issue.

Port’s midfield maestros Ollie Wines and Travis Boak and tough-as-old-boots Willem Drew were too clean, crafty and slick for their Geelong counterparts Joel Selwood and Patrick Dangerfield, who were becalmed everywhere outside the contest.

The Cats’ defence looked fumbly, pressured and, quite frankly, all at sea at times without the presence of sidelined backline general Tom Stewart.

With Stewart sidelined, the Power were able to blaze forward with confidence and efficiency.

The Cats were further hampered when their premier tagger Mark O’Connor substituted out of the match with a hamstring injury in a costly second quarter, which saw Port stamp their absolute authority.

The only sour point for the Power came when forward Orazio Fantasia, who slotted four goals, subbed out in the fourth term to have his troublesome left knee iced.

With a fortnight’s break, Port will handle their skilful but fragile forward with absolute tenderness.

In the opening stanza, the Power were kept in the game by Aliir Aliir, who was awarded with his maiden All-Australian jacket earlier in the week.

Amid some hurried and untidy Cat entries, Aliir floated expertly to the hot spots in defence where he nabbed four first-quarter intercept marks, three of them resulting in Power goals as the home side weathered an early storm before turning on the afterburners.

Port’s speed through the corridor with the ball in hand and pressure without it saw them slam four unanswered majors and take a commanding 29-point lead into the sheds at half-time.

As was the case with their off-kilter radar in attack, the Cats were also their own worst enemy in defence.

Lachie Henderson grassed a mark to gift Steven Motlop his second major before committing another defensive misjudgement to allow Todd Marshall to goal out the back.

Then Jake Kolodjashnij slipped at the worst possible time to concede a late one to Zak Butters.

Fantasia nailed the only goal of the third term, launching a bomb from beyond 50 metres from a shrewd Robbie Gray assist, before jagging his fourth – thanks to another blue from the uncharacteristically disorderly Henderson – to extend Port’s cushion to 41 points.

Fantasia’s exit paved the way for Sam Powell-Pepper to have a couple of licks of some sweet tasting ice cream, with two late goals leaving the Cats reeling.

Probably Geelong’s best player in their run to the grand final last season, Duncan was everywhere in his first game since hurting his posterior cruciate ligament in round 14.

His composure behind the ball and smart marking gave the Cats the faintest of pulses before they were ultimately snowed down by the Port avalanche.

With Stewart out, Duncan looms as a key figure if Geelong are to remain in the hunt.

Aside from his customary four-quarter industriousness, a split-second moment early in the second term embodied why Wines is among the top fancies for this year’s Brownlow Medal.

He outmarked Dangerfield in a crucial one-on-one in the middle of the park, resulting in another Port forward foray, and generally had his more senior rival’s measure, especially in the first half.

Dangerfield spent the off-season licking his wounds after he was well below his best in last year’s grand final loss to Richmond and had only intermittent impact against Port after battling a stomach bug in last week’s meltdown against Melbourne.

A simple marking opportunity slipped through Dangerfield’s fingers in the third quarter, which resulted in Fantasia’s goal.

The 2016 Brownlow Medallist will need to lift in next week’s semi-final, while Wines enters the preliminary final in the form of his life.