The NRL’s proposed conference system and expansion plan to add a second team from New Zealand will face several challenges, not least of which is that there are no current bidders to set up a franchise across the Tasman.

The governing body has flagged the prospect of expanding the competition to as many as 18 teams, with a decision whether to include another Queensland-based franchise to be made in July. League powerbrokers have indicated that another New Zealand-based franchise could be added shortly afterwards, giving the competition an even number of teams that could possibly be split into conferences. 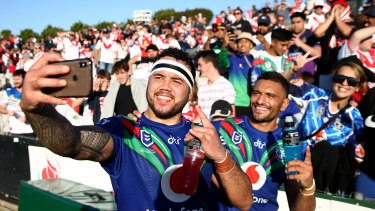 The New Zealand Warriors could have a rivalry with another team based across the Tasman.Credit:Getty

“I’d rather the Warriors establish themselves as regular finalists and that was solid and then we look to the future. There needs to be a stepping-stone approach to make sure we have the depth within the game within New Zealand.

“There are examples in New Zealand sport historically [of new teams] where it starts off with a hiss and a roar and then it fades away.”

The Warriors are open to the prospect of further competition in New Zealand if it is backed by a strong business case, but would be opposed to any incursion into their region of Auckland.

Canterbury chief executive Duane Fyfe said the Christchurch region would have appeal given the infrastructure in the area. The Nga Puna Wai complex is already of state cup standard, while a new stadium that will seat up to 30,000 fans should be completed in 2024.

“Obviously any rugby league advocate would be jumping out of their skin at the prospect of [expansion], but it won’t be viable unless there are people prepared to put money into it,” Fyfe said.

“It would be feasible in time. You would need to do a platform of work for that to happen.

“If they were looking for a spot in New Zealand, and obviously I’m biased, Christchurch-Canterbury would be the place to have it.”

“It’s very much a sporting city with a population just a bit bigger than Canberra, which hosts a super rugby and NRL team. Here we could do the same.”

Wellington Rugby League CEO Andre Whittaker also welcomed the prospect of a new team in his region, but said it could not be rushed.

“It certainly could work with the right support,” Whitakker said. “As a minimum, it would need five years to put this together. That’s how long it would take to do the work.”

There has been a mixed reaction in the league community to the prospect of the competition being split into conferences. Manly coach Des Hasler said the proposal “makes sense”, Melbourne’s Craig Bellamy said “it’s a fair way off if it does happen”, while Roosters mentor Trent Robinson said the game missed an opportunity last season to trial the system following the COVID resumption.

“There is an interesting formula there that can work, but we’ve also got a great system as well that we love to watch every week,” Robinson said.