The NRL has no intention of asking its players to take another pay cut despite the game facing a bill of at least $40 million to relocate the competition to Queensland.

Almost 500 players and staff have shifted north to escape COVID-19 hotspots in NSW and Victoria, with about as many family members expected to join them by the end of the week. The total relocation cost will add up to between $12 million-$15 million per month, the second season the coronavirus has hit the game in the hip pocket.

The chances of a swift return for the displaced Sydney clubs is unlikely after NSW Premier Gladys Berejiklian announced tough new restrictions after 111 new cases were reported on Saturday.

There is a force majeure clause in the collective bargaining agreement struck between the NRL and the Rugby League Players Association that can be used to force parties to renegotiate terms if revenues decrease by $10 million in any year of the deal.

That lever was pulled last season when the coronavirus resulted in decreased crowds and broadcast income. The players agreed to a 6 per cent reduction in the base salary cap for 2021 and 2022, representative payments dropped, while head office slashed $50 million from its operating expenditure.

However, there is no plan to decrease the cap again following the latest setbacks.

“Out of good spirit and goodwill, we won’t be doing anything. There will be no reduction,” ARL Commission chairman Peter V’landys told the Sun-Herald.

“We got ourselves into a pretty good financial position up until this, we were travelling very well.

“All going to plan, it should have no effect. Because we have made savings and got some more commercial revenue, we were travelling financially exceptionally well. So we can absorb those additional costs.”

The NRL’s financial situation has improved after striking a new long-term deal with Sky NZ worth 70 per cent more than the previous one, while Ampol and DoorDash have joined as new major partners. Fox Sports has also committed to a long-term broadcast deal. 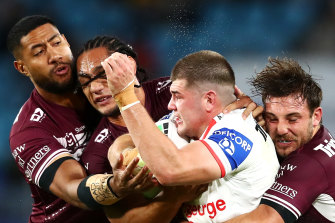 The NRL won’t put a financial squeeze on its players.Credit:Getty

The shift of the players’ families to a Gold Coast hotel was postponed after the Queensland government said it would only accept individual applications for travel exemptions, rather than the group submission already provided. The NRL has moved quickly to fulfil the requirements, raising hopes that families will be reunited before the end of the week.

While most of the players have made the trip north, there are some notable exceptions. The latest is Wests Tigers centre James Roberts.

“Wests Tigers centre James Roberts has not travelled with the team to Brisbane after he was placed in a COVID hold following an exposure to a site in Sydney with a known case,” the Tigers said in a statement.

“James has since returned a negative COVID test. He will remain in isolation for the coming four days and will subsequently miss Sunday’s game against the Brisbane Broncos. Tommy Talau will replace Roberts in the side this week.”

South Sydney veteran Benji Marshall’s immediate playing future also remains unclear. The Rabbitohs granted permission for Marshall, whose wife recently gave birth, to fly north with his family on Saturday. However, the Queensland government’s backflip put paid to those plans, forcing him out of the clash with the Warriors.