We may not see the likes of the “Big Three” again, but the early indications are that Melbourne’s “Fab Four” will also leave an indelible mark on the game.

On Monday night, we witnessed the “Perfect Storm”, a clinical Melbourne side, on Anzac Day no less, thumping the Warriors 70-10. Not since midway through the 1995 season, on the day Darren Lockyer made his debut for a white-hot Broncos that posted a 60-14 win over Parramatta, has a team scored 54 points in one half.

Melbourne did so courtesy of a star-studded spine featuring Cameron Munster, Ryan Papenhuyzen, Harry Grant and Jahrome Hughes. It brought back memories of the great Storm spines which featured the seemingly irreplaceable Cameron Smith, Billy Slater and Cooper Cronk.

The current playmakers haven’t yet achieved anywhere near the success of the original “Big Three”, but the initial signs are promising. If you were to compare the respective trios by taking Jahrome Hughes out of the equation – we have excluded one of the best halfbacks in the NRL purely to allow a comparison between two trios of players – the numbers stack up well for the newbies.

Munster, Papenhuyzen and Grant have played 14 games together, winning 12, scoring 446 points at an average of 31.9, with eight of those wins coming by a margin of 30 points or more.

In the last 14 games played by Smith, Cronk and Slater, the men in purple scored 416 points at an average of 29.7 for 13 wins, eight which came by a margin of 30 or more points.

Of course, the original “Big Three” performed over a much-longer period of time and are all in the conversation to eventually become Immortals after winning multiple premierships and dominating at state and international level.

The current Storm playmakers have a long way to go to reach their rarified air, but it’s an impressive start.

“They perform their role as everyone else does and the team gets the success that we saw on Monday night.

“[The Storm] have got a big 17, to be honest. I’m in the media, I understand the big tags and names. I guarantee you those four guys wouldn’t see themselves any bigger than anyone else in the team. That’s really important. 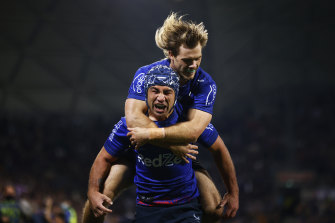 “You look at the humility that Tom Trbojevic and Nathan Cleary have; that’s important to have sustainable success. You need that humility and these four guys have it.”

“Whether it be players, teams or in this case a group of players, they all deserve their own identity and should never be compared.

“What makes these four different is they can each play different roles in the spine, they are interchangeable.

“We saw it last night when we took Ryan off as a precaution with his ankle. Munster went to fullback, Harry went to Munster’s six position. Especially the one, six and seven, the four of them can play that position.

“Maybe Harry couldn’t play fullback, but he can play six and seven. Munster can play all three, Paps started playing off the bench and coming into the middle. The fact they are interchangeable, that makes them pretty different when other spines are pretty set. These guys can move around, which certainly makes it different.”

Munster is arguably the form player in the competition. He was the difference against the Raiders at Wagga Wagga’s McDonald’s Park three weeks ago and his form has only improved on each subsequent outing.

The Maroons pivot has been touted as the ideal signing for the Dolphins in their inaugural season, particularly given the Redcliffe-based outfit missed out on the services of Kalyn Ponga. However, he isn’t going anywhere anytime soon.

“Those four guys wouldn’t see themselves any bigger than anyone else in the team.”

“Cameron is contracted for next year and the club won’t be releasing him early,” said Melbourne CEO Justin Rodski.

The Storm quartet have only limited time together at NRL level, but some of its members have bonds stretching back to their experiences for feeder team Sunshine Coast in the Queensland Cup. With Grant at hooker and Papenhuyzen sharing the fullback role in 2019, the Falcons won the opening 14 games of the season.

“You could see them build combinations even back then and you can see them carry that into these matches today,” said Falcons CEO Chris Flannery.

“The platform was laid several years ago. You can certainly see similarities to what they were doing here and what they’re doing on the field now.”

Multiple club records tumbled on Monday night. It’s the equal most points scored by a Melbourne side, while Papenhuyzen’s haul of 22 and the four tries from Xavier Coates are the biggest hauls from a Storm player on Anzac Day. The result was possible due to the dominance of the spine, a rampaging pack led by Nelson Asofa-Solomona and a depleted Warriors side that completed only two of its seven sets in the second half.

So strong is the Storm spine that Brandon Smith, the outstanding Kiwi hooker, doesn’t start in it.

“Individually they are playing well in their positions and are really starting to work out each other’s strengths and how to maximise the opportunities to put each other into those positions,” Slater said.

“That’s when you really get the benefit of playing alongside good players, when you understand what they’re trying to do and the positions they like to get the footy in.

“They’ve all got a good sense of the game, the four players in key positions. But don’t for one minute underestimate the roles of all the other players in the team, what they do for each other.

“That’s what the Melbourne Storm do better than anything; they have some classy individual players, but they all play as a team and everyone understands their role.

“When they all do that you see the likes of Munster and Papenhuyzen and Grant and Hughes really shine. It allows them to play the game with a sense of freedom.”