Home » Rugby » Penrith to kick-start season, Warriors back home by round 15

Premiers Penrith will kick-start the season against Tom Trbojevic’s Manly, the New Zealand Warriors appear set to play their first home game in round 15, and the new $735 million stadium at Moore Park is on track to open for the final-round clash between bitter rivals the Sydney Roosters and South Sydney.

The NRL draw was released on Tuesday morning with Magic Round confirmed again in round 10 at Suncorp Stadium, along with the NRL All Stars clash. 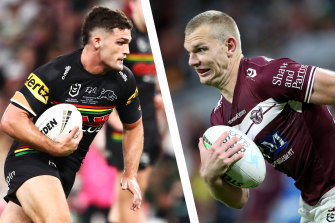 Nathan Cleary will be racing to be fit for the Panthers’ opening clash against Tom Trbojevic’s Sea Eagles.Credit:Getty Images

The Storm will host five games in the opening seven rounds as a show of appreciation after the club spent the best part of two years on the road because of COVID lockdowns.

It was already known the Panthers would launch the season at the foot of the mountains on a Thursday night, and meet Souths in the grand final replay in round four.

The NRLW will also return on February 27, with an April 10 grand final.

NRL chief executive Andrew Abdo said: “It is wonderful to be scheduling matches in NSW, ACT and Victoria again after the relocation in 2021, and we’re confident we will see the homecoming of the Warriors to New Zealand.

“Fans will be back at games right across the country and this schedule takes the Telstra Premiership to 20 cities and towns to maximise the opportunity for rugby league fans to watch their heroes live in person.”