Collingwood great Scott Pendlebury has signed a two-year contract extension to help usher in a “new era” but whether he remains as captain will be settled by a conversation with new coach Craig McRae over the pre-season.

Pendlebury, 33, will remain at the Holden Centre until the end of 2023, meaning he could play 18 seasons in the black and white.

There had been speculation over his future last month when, having been offered a one-year extension, he issued a thinly veiled threat on radio, declaring an interest in moving into a coaching role at another club as soon as 2023. He also did not rule out playing at another club next year with a view to coaching there a year after. 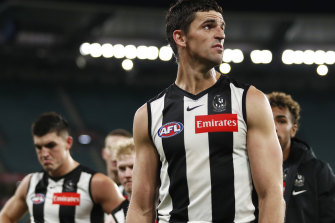 However, he soon apologised and said he would remain with the Magpies until he retires as a player.

“I’m glad to have come to an arrangement with the club to share in what feels like a new era,” Pendlebury said.

“Being a one-club player was one thing, something I am proud of, but my main motivation is to do all that I can to assist ‘Fly’ and the new coaching group develop the squad. If you are not in contention, you have to be working towards it. That’s exciting.”

Pendlebury has played 334 games for the club and captained 183 times over eight seasons – club records. A five-time Copeland Trophy winner, he finished third in the best and fairest this season. He finished the year with a leg fracture against Port Adelaide in round 19 but his remarkable consistency was shown in that this was the 13th time in 16 counts he had finished in the top three.

He remains the consummate professional but the Magpies may opt to install a new skipper for a fresh start under McRae. Pendlebury must first decide whether he wants to retain the role, and the Magpies say a final call will then be made between Pendlebury and McRae.

If there is change, fellow midfielders Steele Sidebottom, 31 in January and Taylor Adams, 28, have support, the latter having improved in the way he handles leadership responsibilities. Veteran defender Jeremy Howe, 31, is also highly rated and is in the leadership group, while former Magpies’ recruiter Matt Rendell believes it’s time for Darcy Moore to be given the top job. Moore is arguably the Magpies’ most important player and is in the leadership group.

The Magpies endured a tumultuous 2021 campaign. Coach Nathan Buckley stepped down after the Queen’s Birthday clash against Melbourne, and the Magpies eventually finished 17th with only six wins. But head of football Graham Wright said Pendlebury remained a fine example for the club’s emerging talent to follow.

“One day, Fin Macrae or Tyler Brown or Reef McInnes will be able to look back and appreciate that in their earliest years they learnt from one of the best of all time in Scott,” Wright said.

“His achievements speak for themselves but his dedication to his craft and ability to inspire the wider group is a fabulous asset for our club. It is very pleasing to know he will be with us for another two seasons.”