Melbourne Storm’s premiership hopes are in danger with star fullback Ryan Papenhuyzen expected to miss the rest of the season after going down with a knee injury in his club’s 20-16 loss to Canberra Raiders at AAMI Park on Sunday.

He went to hospital on Sunday with knee surgery set for Monday.

The loss sees the Storm fall to three straight losses for the first time since 2015.

“No. He’s got a broken knee cap. He won’t be back I wouldn’t imagine,” Bellamy said.

Bellamy was also unhappy with his side’s inability to convert its scoring chances, although he also commended the defensive efforts of the Raiders to hold up players on their try line on multiple occasions.

Just before the 20-minute mark Raiders star Jack Wighton sprinted down the right sideline and collided with Papenhuyzen, who collapsed in immediate pain.

He tried to stand and put weight on the injury but fell down again and needed to be helped from the field with the Storm quickly confirming he had a suspected fractured knee cap while it wasn’t clear if he had further damaged any of his knee ligaments. 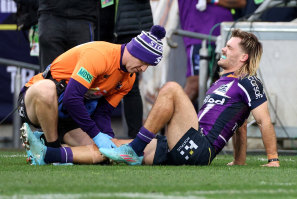 Ryan Papenhuyzen goes down with a serious knee injury.Credit:NRL Photos

But his return this season looks highly unlikely with seven games left before finals while the loss sees the team fall to fourth place with an 11-6 record now equal with fifth-placed Brisbane Broncos.

The Raiders still have a lot of work to do to make the top-eight but this win will give them hope of a late-season revival.

Storm legend Cameron Smith made his long-awaited farewell to AAMI Park pre-game walking a lap of honour while the eastern stand has been renamed the Cameron Smith Stand for Storm home games.

Cameron Munster had spent the week in isolation after testing positive to COVID-19 and missing Queensland’s game three win in the State of Origin.

He powered into the contest like he had energy to burn, making two line-breaks in the opening 14 minutes and having a hand in the opening try by feeding Kenny Bromwich on the left edge who offloaded to Nick Meaney for the try.

The Storm appeared in total control in those early minutes until Papenhuyzen burst onto the left edge and threw a blind pass which was intercepted by centre Sebastain Kris, who ran 80m to score under the posts and level the game at 6-6.

The Raiders extended their lead via a try from James Shiller on 22 minutes making it 14-6 to the visitors.

Munster and Jahrome Hughes looked have created a try soon after but a video review showed Hughes had fumbled the ball while attempting to dive and ground it while Justin Olam’s desperation tackle stopped a certain Canberra try just before half-time.

The Storm couldn’t pierce Canberra’s defence to start the second half despite several close calls but their pressure began to build before Hughes burst over after 20m run to make it 14-10 on 50 minutes.

Canberra’s Jordan Rapana was sent to the sin bin visit on 57 minutes after collecting Storm centre Marion Seve around the head in a tackle. Seve was forced to leave the field for a head injury assessment.

Storm star Harry Grant powered over from dummy-half to score the go-ahead try, which Meaney converted for a 14-12 lead with 20 minutes to play.

But the Raiders fought back behind two penalties, the second for Munster appearing to talk back to the referee, and it led to James Schiller creating a try from nothing, kicking to himself on the last tackle and toeing the right sideline before touching the ball down to make it 20-16 to Canberra with 10 minutes to go.

Schiller went down with what appeared to be an ankle injury with about eight minutes to play but the Storm couldn’t capitalise despite Olam running to the try line before being held up.

Hughes looked to have gone over with three minutes left but the Raiders managed to hit him hard enough to knock the ball loose and the Raiders held on for victory.

The Storm play South Sydney at Accor Stadium this Saturday at 7.35pm.