The Penrith Panthers are expected to be dealt a massive blow five days out from the grand final, with mid-season recruit Tevita Pangai Junior set to be ruled out with a knee injury.

The Herald can reveal the Panthers had a meeting this morning to discuss whether to carry Pangai Junior for the rest of the week despite the star forward suffering a medial ligament injury in the preliminary final against Melbourne.

It is understood the Panthers have decided to rub Pangai Junior out of Sunday’s clash with South Sydney despite initial plans to give him the rest of the week to prove his fitness. It’s unclear whether he will be named in the official team sheet at 4pm.

Speaking on Nine's 100% Footy on Monday night, Paul Gallen said Pangai has been worth the $120,000 investment from the Panthers to bring him into the fold prior to the August 2 trade deadline.

"I thought he was really good. Without a doubt I think (the gamble) was worth it," Gallen said.

“You compare his games the way he played there to how he played at the Broncos, he had [Panthers] players moving around him and doing things allowing him to be better. I thought he was devastating.” 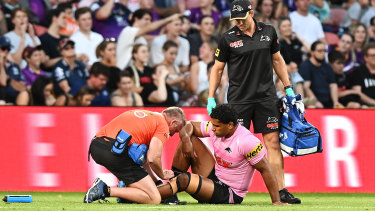 Bulldogs general manager Phil Gould, who will welcome Pangai to Belmore in the offseason, was delighted that both he and Matt Burton have experienced a finals campaign with the Panthers before linking with Canterbury.

“It’s going to be wonderful for the Bulldogs that he’s played with that side up to this point in the season,” Gould said on 100% Footy. “It’s going to be far better than had he sat out the rest of the year waiting for his Bulldogs assignment. You’re going to have Matt Burton and Tevita Pangai Jr coming to the Bulldogs next year who have experienced a run up to a grand final. From my understanding he’s really learned a lot since he’s been there.”