Exciting first-year wingman Nic Martin has signed a new two-year deal to remain with Essendon until the end of 2024.

Martin, 21, moved from Perth for pre-season training with the Bombers, before being picked up by the club in the pre-season supplemental selection period (SSP) in February. 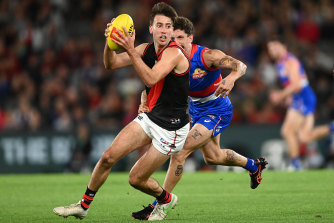 Nic Martin, who racked up 24 touches against the Bulldogs in round seven, will remain with the Bombers until 2024.Credit:Getty Images

Martin has been one of Essendon’s few bright spots this season, starting his career with a Rising Star nomination after racking up 27 touches and kicking five goals in the Bombers’ 66-point loss to Geelong in round one.

Though he missed round two due to COVID-19 protocols, Martin has continued his strong form, cementing his place in Essendon’s team and averaging 22 touches a game.

Martin’s road to the AFL was unconventional, missing out on selection in three national drafts and being told by AFL recruiters to improve his running and defensive attributes. Before entering the AFL system, Martin was also completing a university degree in tax accounting.

“Firstly, for the opportunity to train with the club and be exposed to an AFL environment but then to be offered a spot on the list is something I’ll forever be appreciative for,” Martin said.

The older Martin almost matches Daicos for disposals, while outperforming him in kicking efficiency and marks per game.

Martin’s signature comes as the Bombers are yet to re-sign three key young players from their 2020 draft haul beyond this season.

Wingman Nik Cox, mid-forward Archie Perkins and key defender Zach Reid are still negotiating with Essendon regarding their contract length, although the Bombers still expect them to stay with the club.

The Age reported on Tuesday that Perkins preferred a shorter, two-year deal, while the Bombers were hoping to lock in all three players until 2025. Cox and Reid are yet to decide their preferred contract length.

Both Perkins and Cox have regularly featured for the Bombers since their first season in 2021, while Reid battled glandular fever and a stress fracture in his back during his debut season, limiting him to only one game.

However, Reid returned to the side in Essendon’s 32-point loss against the Western Bulldogs last round, which was the club’s sixth loss of their disappointing season to date.

Cox suffered an ankle injury during the match and was substituted for midfielder Dylan Shiel at half-time. Coach Ben Rutten said after the game that he was hopeful the young utility would still be able to play against Hawthorn on Saturday night.

However, forward Jake Stringer will miss the match and the next month after suffering a hamstring strain in the Bombers’ round seven loss.