Brad Fittler’s Blues will attempt to complete their Origin series clean sweep on Queensland soil yet again after a late venue switch to the Gold Coast. 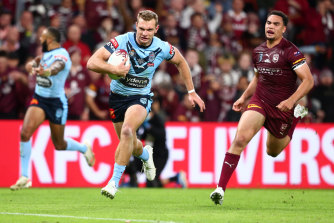 Brad Fittler’s Blues will attempt to complete their clean sweep on Queensland turf.Credit:Getty

The ARL Commission held an emergency meeting late Saturday, when it was decided to move game three to Cbus Super Stadium. A crowd of more than 27,000 fans will now be able to watch the Origin finale.

The Blues are already based in Kingscliff, just a 10-minute drive south of the Tweed.

Not only are they attempting their first 3-0 whitewash since 2000, it will be the first time all three games have been played on the Maroons’ turf.

The series opener was moved from Melbourne to Townsville – the Queensland government paid $8.3m for the rights to see their own state belted 50-6 – before the Blues clinched the series at a heaving Suncorp Stadium last month.

“We are disappointed not to be able to give Newcastle the city’s first State of Origin, but we must operate within all State Public Health Orders and not having a crowd in Newcastle negates the opportunity for our fans from the region,” Abdo said.

“The Gold Coast has a very low infection rate and both Origin camps are currently located within driving distance of Cbus Stadium. It means neither team will be disadvantaged by travel.

“This is an exciting outcome for the Gold Coast. It will be the first time in history that the Gold Coast has hosted State of Origin.

“The Gold Coast is an important market for us and in the current circumstances presents a safe outcome for the community and a great outcome for our fans in south-east Queensland.

“It does mean all three games are played in Queensland, but our priority is ensuring the safety of the community and the continuity of the competition.”