Tariq Sims won’t be granted an immediate release to join NRL heavyweights Melbourne after Storm officials told the Dragons they weren’t planning to have the State of Origin back-rower on their books in 2022.

Just hours after Sims fronted a press conference in which he said “the clubs were talking” about a potential mid-season switch, the Herald and The Age was told by sources familiar with the situation the Storm quickly phoned St George Illawarra’s top brass to douse the prospect.

Sims has signed a one-year deal to join the Storm next year after the Dragons opted not to offer him a contract beyond this season.

The possibility of Sims joining the Storm early would have made them an even bigger threat to title favourites Penrith.

Asked about the chance of an early release, Sims said: “I think the clubs are talking at the moment, but I think you’d have to ask them. I never wanted to leave here at the first place. It’s rugby league, it’s a business. You have to take it week by week.

“I’m pretty focused on playing on good, consistent, hard football. I’m a firm believer in controlling what you can control.” 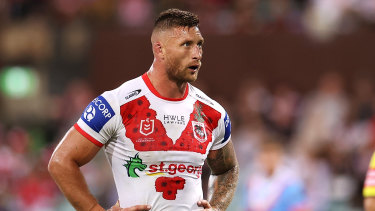 Dragons forward Tariq Sims will join the Storm in 2023.Credit:Getty

But those chances were quickly snuffed out when the Storm were alerted to Sims’ comments and clarified their stance with the Dragons.

Sims has been elevated to Anthony Griffin’s starting side for the crunch clash against the Tigers in Wollongong with Jaydn Su’A (ankle) facing an extended stint on the sidelines with an ankle injury. Su’A was hurt under a Jared Waerea-Hargreaves tackle in the Dragons’ Anzac Day win over the Roosters.

It means the Dragons will be desperate for Sims to enjoy an extended run of good form in the next month as he tries to keep his State of Origin jumper.

NRL clubs have until August 1 to finalise their top 30 rosters for this season and the Panthers made an astute mid-season purchase when they parachuted Tevita Pangai jnr into their squad for the title assault last year.

The Storm will lose the Bromwich brothers Jesse and Kenny, as well as Felise Kaufusi, to the Dolphins, while Brandon Smith will link with the Roosters.

“It was a pretty easy [decision to sign with Melbourne for 2023] in the end,” Sims said. “The club didn’t offer me anything so I’ve got to make sure I secure my future. To do it and get it done and go to a club like Melbourne, it’s very exciting.

“But I’ve still got a job here to do. I’ve started at the top of Australia and I’m working my way down the [coast] and to go to Melbourne is exciting on the personal front.

“I still love [the Dragons]. I still love the people in the front office, the fans and they’re all a very big part of my life here the past six or seven years.

“They’ve been nothing but awesome to my family and I and I’ve never taken it for granted to pull on the Red V jumper. It’s a very proud jumper. Still to this day, every time I go out before I play, I always smell it, and I think about the past players and my teammates. It’s my last ritual before I go out and play.

“My love towards the club hasn’t changed and I don’t think it will. It’s given me a lot of opportunity and time to grow as a player. When ‘Mary’ [Paul McGregor] got me here, it was probably one of the most exciting times of my life.”