Three-time premiership star Luke Breust has declared he wants to finish his career as a one-club player with Hawthorn, and will only consider a shift if “forced” to.

Breust, one of the game’s leading small forwards, eschewed free agency in February when he inked a two-year extension, tying him to the club until the end of 2023. 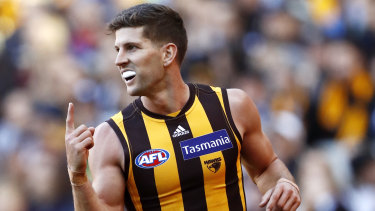 Sharpshooter Luke Breust is one of the great modern day Hawks.Credit:Getty Images

However, the rebuilding Hawks, with president Jeff Kennett determined to be in premiership contention in two years, appear set for an off-season shake-up in a bid to secure more first round draft picks.

It has been reported by Fox Sports that Brownlow medallist Tom Mitchell, 28, would be open for a trade, potentially to Richmond, while Breust is another player who would have great currency with rival clubs, particularly for those in the premiership window.

The dual-All Australian, fresh from a few days at the family farm in Temora, NSW, told The Age on Tuesday that he had no intention of leaving the club that selected him in the 2009 rookie draft.

“I am more than happy with the way things played out,” Breust said.

“To get two more years, I will be 33 at the end of that contract. That will be 14 or 15 years in the system. If I can squeeze any more out of the Hawks, I will try and do that.

“If not, then I would be fairly comfortable finishing my career as a one club player. You look back and reflect, especially where I was from – I was only a slim chance of getting drafted, then on a rookie list for three years. Perspective is a massive thing in my life.

“Unless [there is] something out of the blue, circumstances [change], or maybe it’s a forced hand, you might think about it [a new club] but, at this stage, I am completely comfortable with where my situation is at.”

Heading into Friday night’s clash against Sydney at the SCG, Breust is the Hawks’ leading goal-kicker this year with 18, and has 426 career goals – ninth all-time at the Hawks – in 231 matches.

His season to date

Having debuted in 2011, Breust’s first six years were a blur of finals and premierships, but life in recent years since the departure of several club greats has been tough. The Hawks have only two wins so far this season, and a rebuild is underway.

Breust said “footy is a pretty brutal caper” and the natural cycle was to have some “uncomfortable” tough periods.

“I was only a slim chance of getting drafted, then on a rookie list for three years. Perspective is a massive thing in my life.”

“It’s just trying to reframe that in your mind, not getting bogged down in wins and losses, and trying to see through that and take bits of gold out of it,” he said.

The Hawks are looking to their youngsters to develop, with Breust mentioning the likes of Mitchell Lewis, Jacob Koschitzke, Dylan Moore, Oliver Hanrahan and dashing half-back Changkuoth Jiath, the latter currently in discussions over a contract extension. Jiath, averaging 21 touches per game, is improving in his football smarts, including at what times and from where on the field he should run and create.

“I always thought there was plenty of athleticism and talent there (with Jiath), but I think now you are starting to see that, coupled with some strong form on the field and getting his hands on the footy and backing himself aerially to go and chop out,” Breust said.

Pre-season back surgery derailed Jack Gunston’s season, and when the three-time premiership star, 29, did return, it was only for a week against St Kilda. He was a late withdrawal against West Coast because of back spasms and has since been put on ice, pending further analysis.

“It’s a genuine week-by-week, unfortunately … and how can he build up and get some footy in, in this back end of the year and, hopefully, carry something into the off-season,” Breust said.

Breust said the Hawks missed Gunston’s versatility, and he personally was missing his “connection” in the forward line.

The coach in waiting

There has been much written about whether Alastair Clarkson and the Hawks will seek to extend their partnership beyond this season, should rival clubs come calling, or at the end of next when Clarkson’s contract expires. Breust said the Hawks had enjoyed having Clarkson front a young group more and “lay down the law”. However, he said former teammate Sam Mitchell, tipped as a coach in waiting, had the “game smarts” to be a senior coach but is still developing a full understanding of the various responsibilities, including people management.